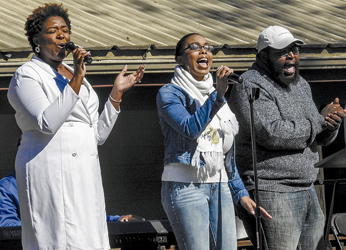 ALACHUA – For the past 15 years, the City of Alachua has hosted a celebration of Martin Luther King Day. The City provides food, equipment and entertainment at the Cleather Hathcock Community Center. City employees from the parks and recreation department as well as the city manager’s office provide their time and services for the event. Although the City provides these amenities, it’s a community affair as volunteers from churches and community organizations offer their time to serve the food, prepare deserts and provide entertainment. The celebration is a tribute to honor Reverend King and to carry on his legacy.

The Declaration of Independence said all men were created equal and endowed by their Creator with certain unalienable Rights, that among these are Life, Liberty and the pursuit of Happiness. But the reality was that minorities, especially African Americans, were not included in that promise. Before 1865 most of them did not have their liberty or freedom, and many were slaves. But even 100 years later, there was not equality. Jobs, education and opportunities were often limited and segregation continued, even down to what drinking fountains, restrooms, bus seats and restaurants African Americans could use. They had gained liberty but not equality.

Although King was one of many people who became involved in the Civil Rights movement, his speaking ability and organization of nonviolent protests and marches made him the most visible leader of the movement. In1963 he organized the March on Washington where he delivered his famous “I Have a Dream” speech, talking about a society where all people regardless of color were treated equally. Over 250,000 people attended the march.

King was awarded the Nobel Peace Prize in 1964, for his efforts to fight racial inequality through nonviolent protests, and he was instrumental in the passage of 1964 Civil Rights Act proposed by President Lyndon Johnson. While all his work was critical in gaining some equality for African Americans, there were other people that opposed his efforts and that made him a target as well.

In 1968, King was planning a national occupation of Washington, D.C., to be called the Poor Peoples Campaign when he was assassinated on April 4 in Memphis, Tennessee. His death was followed by riots throughout America’s cities. But his legacy and accomplishments in Civil Rights and equality lived on.

King was posthumously awarded the Presidential Medal of Freedom and the Congressional Gold Medal. Beginning in 1971, states and cities began establishing local holidays to celebrate his birth on Jan. 15, 1929. Finally in 1986 President Ronald Reagan made the third Monday in January Martin Luther King Day.

Alachua’s tribute continues, rain or shine, and despite the cold weather, this year’s event was well attended. It is a community-wide celebration to honor the achievements of Dr. King and support his work. Part of that goal is through the right to vote. The Alachua Supervisor of Elections office set up a booth for the public to register to vote, and the federal government had a recruiting table for people to sign up as census takers.

Artist Yvonne Ferguson painted a portrait of Dr. King as speakers and religious leaders spoke about the goals of Dr. King. Dancers and musicians provided entertainment, chiefly with a spiritual influence. Caring and Sharing Learning Center, a dance school and ministry also had a booth as well as part of the entertainment.

Pastor Natron Curtis delivered the opening prayer followed by the National Anthem and remarks by Alachua Mayor Gib Coerper and State Representative Clovis Watson, Jr. Minister Eugene Franklin gave the Keynote Speech on Dr. King’s legacy and the importance of community and culture. Interspersed between speakers was music and dance provided by a variety of artists.

The final speaker was Minister Derrick Smith who read a letter Dr. King wrote to his fellow clergymen when he was in the Birmingham jail for his civil rights efforts. King urged them to join the effort to bring equality to all.