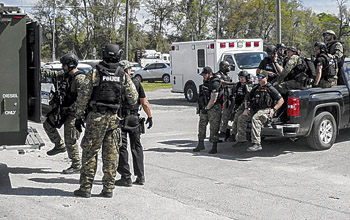 A nearby deputy saw a gray four-door sedan leaving the parking lot at a high rate of speed and attempted to stop it as other units responded to the casino.

The vehicle failed to stop and fled southbound on U.S. Highwayv441 with units in pursuit. As deputies pursued the vehicle, other deputies arriving at the casino discovered a male employee suffering from a gunshot wound to his upper body. Witnesses at the business reported three masked men entered the casino, robbing it and shooting the employee before fleeing. The victim was airlifted to a Gainesville hospital

Meanwhile, the vehicle pursuit continued into High Springs where the car stopped near U.S. Highway 441 and Northwest 222nd Street, and the suspects fled on foot. Inside the vehicle police found body armor and several firearms and determined that the fleeing suspects were probably armed and dangerous.

Police believed there were three to four suspects, three black men and one white man. Police did a reverse 911 call to warn residents and ask them to be on the lookout for suspicious activity. Shortly after the warning, officers were alerted by a resident of a man hiding in the backyard. Authorities apprehended one suspect, Caleb Bowers of Lake City, who was also the owner of the getaway vehicle.

According to Sgt. Frank Kinsey of ASO, multiple units were on scene quickly and set up a perimeter. As SWAT teams arrived, they began their search. “We discovered several empty houses, outbuildings and residences with no one home and unlocked doors. We had to stop and search each to make sure they were not behind us as we searched. This slowed down initial searches,” Kinsley said.

“We pulled all our resources from multiple agencies to coordinate the search,” Kinsley said. “That included SWAT teams, K-9s, armored vehicles and helicopters. Based on the fact they shot someone and had armored vests and weapons in the car, we know these are very dangerous men and want to get them with no further injuries to residents or officers. We went door to door to check on the safety of the residents.”

By noon, there were enough SWAT teams on site to initiate a grid search pushing forward through the neighborhoods. The search lasted until dark when visual contact was limited. Despite the extensive effort the other three suspect eluded police and remain at large. Anyone with information is asked to call the Columbia County Sheriff’s Office at 386-758-1095.