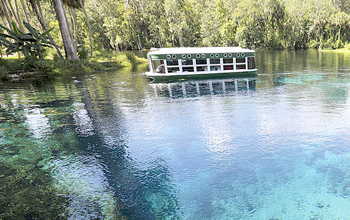 HIGH SPRINGS – Much of north Florida's beauty is based around its rivers and springs. The Silver River is a short, spring fed river east of Ocala with crystal clear water, abundant wildlife and seven miles of pristine undeveloped land. There have been settlements at nearby Silver Springs since before the first Europeans. The history of the Silver River is haunting and familiar. The film, “Out of the Mist: A Silver River Story,” explores its natural beauty and the lives of people who lived there and depended upon the river for their livelihood.

After Florida became a United States territory, settlers established a town at Silver Springs in 1852. Since the mid-19th century, the natural environment of Silver Springs attracted visitors from throughout the United States and became a popular tourist spot for visitors who poled their way along the narrow stream through overhanging cypress and Spanish moss. With the invention of the paddle wheel boat, Silver River also became a distribution center for Central Florida. Plantations growing produce used the river as a transportation route from nearby Ocala to settlements to the east.

In the late 1870s, Phillip Morrell fixed a piece of glass in the bottom of a rowboat and a new enterprise began. Silver River's glass bottom boat tours have been world famous for more than 100 years.

In the early 1900s, Ed Carmichael purchased much of the land around the river and by the late 1920s he had developed a park that eventually became known as Silver Springs Nature Theme Park. The attraction featured native animal exhibits, amusement rides, and 30 or 90-minute glass-bottom boat tours. Upon Carmichael”s death, the land was donated to the University of Florida to ensure that the land would stay undeveloped so its pristine beauty could be maintained.

The tourist attraction continued after his death under lease to several corporations. The undeveloped tropical nature of the land also made it a popular spot for Hollywood films and was a frequent location for the series of Tarzan films in the 1930s to 1950s. Other films shot on the Silver River include the James Bond movie “Moonraker,” a “Smokey and the Bandit” sequel and the series “Sea Hunt” with Lloyd Bridges.

State of Florida Buys the Land

Beginning in 1993, the first thorough scientific studies of the springs were conducted and wildlife rehabilitation was started. That year, the State of Florida bought the underlying land, while private businesses continued to operate the attractions and concessions. The park went through a number of changes and revenue dropped off and the company running the park ended their lease. In January 2013, the state of Florida announced it would begin managing the park. Palace Entertainment agreed to pay a $4 million buyout to end their lease. The private park closed as of Sept. 21, 2013 and it became part of the Florida State Park system. The state also continued the glass bottom boat tours that were a long tradition at the park.

Cinematographer Mark Emery Grew up on the River

Double-Emmy-Award-winning wildlife cinematographer, naturalist and longtime Ocala resident Mark Emery moved to Ocala at age four and graduated from Vanguard High School in 1972. He grew up on the river, and as a young adult he worked at Silver Springs as a glass-bottom boat captain and wrestled alligators and milked rattlesnakes at reptile expert Ross Allen’s institute at Silver Springs. Emery also spent six months employed as a guard against poachers on the then 23,000-acre Drake Ranch in western Marion County and lived in very primitive conditions.

His love of the area and experiences as a boat captain eventually led him to become a photographer and cinematographer. He worked with and learned his craft from Academy Award winning underwater cinematographer Jordan Klein, Sr. Over the years, Emery has received two Emmys for National Geography nature films. He also has been involved in producing, filming and directing shows on channels including the Discovery Channel, PBS Nature and BBC, and has made a film with the Navy SEALS.

His relationship to the river and the older boat captains eventually led him to his newest film, “Out of the Mist: A Silver River Story” featuring four of the old-time boat captains and their cumulative experience of over 200 years. Intersected with beautiful footage of the nature and wildlife on the river, the film interviews the four captains, three of whom are now retired.

Emery produced the film with his own resources and sponsored “go fund me” finances, working on it for five years in between other jobs. Three of the four captains featured in the film are African Americans who worked at the park during the time of segregation. While they drove the boats and gave tours, the visitors were all white and the boat captains only worked at the park and were unable to bring family or friends for the tours. A now defunct park along the river was called Paradise Park was for “coloreds” only.

In the film, the four boat captains, Virginia Ferguson, Roosevelt Faison, Oscar Collins and Leon Cheatam, tell of their work on the river and the information they shared with some 12 million visitors over the years. They also reflect on their experiences in a segregated society and the changing times.

But the captains spent much of the interviews on what they loved about their job, the beauty and passion they felt for the river. How they enjoyed watching the wonderment of the tourists at seeing the unique beauty of the river and its wildlife. To the captains, it was the perfect job, with each day bringing something different. The film also tells of the ebb and flow of certain species of wildlife and the increase in algae in the river.

In the 1970s to 1990s human growth in the surrounding area, including increasing numbers of septic tanks, fertilizer and livestock operations, caused nitrate-nitrogen contamination along the river, increasing algae growth which also affected the park’s tourism. Since that time the State of Florida has been leading a restoration effort that has brought the river back to its former beauty.

Due to the environmental impact on the river, the Florida Springs Institute has sponsored showings of Emery's film and on March 5 the movie was shown at the historic Priest Theater in High Springs. Starting with a BBQ dinner at the High Springs Brewery, the attendees were able to meet and talk with Emery and then hear his discussion on what the film was about and his passion for the area.

Emery also talked about the unique qualities of the river for underwater photography, stating that the Silver River environment provides an atmosphere where filmmakers don’t have to deal with salt water in their equipment and the light conditions in the water are very positive.

Emery hopes that the film will make people aware of the uniqueness of Florida's environment and help raise awareness on the need to preserve it for future generations.