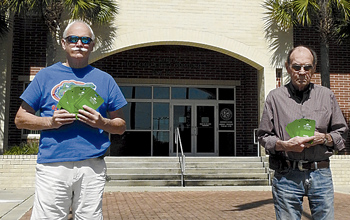 ALACHUA – A local program that provides food to families hit a glitch when COVID-19 distancing requirements and shutdowns occurred. But Alachua resident and volunteer Ted Wilson wasn’t about to let the vital program flounder when so many children and families depended on it.

Food4Kids Backpack Program of North Florida was founded by Jennifer Moore who took pizza, juice and cupcakes to Gainesville’s Terwilliger Elementary School to celebrate her daughter’s birthday with her third-grade class on a Monday morning in 2010. She noticed that as most kids were still finishing their first slices of pizza, a few were already asking for seconds and thirds.

When she asked the teacher about these children, she learned that the reason they were so hungry was because it was a Monday, and there was a good chance that the last full meal they had eaten had been at lunch on Friday.

After looking into the matter further, she learned that one out of four children in North Florida live in food-unstable homes. That often means they don’t have reliable access to food, especially on the weekends.

Seeking to ensure these children didn’t go without food, Food4Kids Backpack Program of North Florida was founded to create a network of locations that would help sponsor, fund or donate and distribute food every Friday to school children in need.

The Backpack Program volunteers fill backpacks with nonperishable food and distribute them to students in need, from kindergarten through high school. The kids bring these backpacks home on Friday and return them on Monday so they can be refilled for the following weekend. They also receive larger boxes of food for extended holidays and summer breaks. The organization partners with food banks, faith networks and local businesses to create a sustainable support network that gathers monetary or food donations and delivers them to the schools and volunteer locations to distribute to in-need students.

There are over 29 volunteer groups and charities involved in the program that distribute to two to three schools each. For the past 12 years, Wilson has been doing the backpack program for Alachua Elementary and Santa Fe High School. Working with other volunteers they distribute between 25,000-30,000 meals a year.

But like everything else, the COVID-19 virus has affected this program as well. Schools are no longer open and other distribution points have been affected by the need for social distancing and safe handling of food to avoid spreading the virus.

Just before the state lockdown, Wilson had purchased a large amount of food but suddenly had no way to distribute it without exposing volunteers to possible infection. Wilson got in touch with Alachua Mayor Gib Coerper to see if the City of Alachua could help with getting the food distributed while it was still fresh. The mayor was able to set up a distribution point at Alachua’s Legacy Park through the city’s Recreation and Culture department that got food to the families that needed it.

However, the Food4Kids Backpack program still had an issue for the future. The schools were still going to be closed for the year. Social distancing requirements also made it difficult to organize volunteers for a distribution event. After rethinking how it could be done with the least amount of contact, they switched to grocery store gift cards that offered the opportunity for families to still get food and also be able to choose what foods were best for the family.

Coerper contacted a friend at Duke Energy to see if they would be willing to sponsor funding for gift cards. The company donated $500 toward gift cards, which Wilson bought as individual $25 cards.

While this was a single donation, many individuals and businesses have helped as well. Wilson said he is always amazed by the generosity of the community and local businesses that contribute to the program. “We never lack money to keep the program going or volunteers to lend their time,” said Wilson. “This community believes in helping others in times of need.”