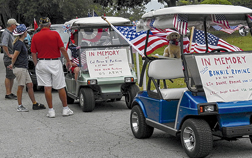 ALACHUA – A local community found a special way to pay tribute to veterans this past Monday as they observed Memorial Day. While the COVID-19 pandemic changed routines and events, including the cancellation of most Memorial Day ceremonies, residents of Turkey Creek in Alachua banded together to honor the fallen. Due to COVID guidelines, the ceremony was held outdoors with as little close contact as possible.

At 8 a.m. on Memorial Day, the vehicles started to gather at the Turkey Creek Golf Club. Golf carts came first, followed by motorcycles and finally cars and trucks. Some vehicles were decorated with signs honoring deceased veterans while others were driven by veterans there to honor their fallen comrades. Most were decorated with flags. A sound system played music as the participants gathered. At 9 a.m. Alachua Mayor Gib Coerper led the Pledge of Allegiance, followed by the haunting melody of “Taps” honoring the fallen and deceased.

Many of those assembled were veterans.

Eric Persons was a helicopter door gunner in Vietnam during the brutal Tet Offensive and the Battle of Hue. All 10 of his brothers and sisters also served in the military.

Standing alone dressed in a red Marine shirt and cap was Ken Beasock, a retired Marine Colonel. He served 42 years from 1950 -1992 and saw combat in the Korean War and two tours of Vietnam.

Farther back among the motorcycle riders were Fred Johnson and Virginia McCord. Johnson served in Vietnam from 1970-1971 as a helicopter pilot. Although the U.S. had already been doing it covertly, Johnson was in the first Cobra helicopter to officially cross into Cambodia.

McCord was a Navy nurse during the war and was stationed in Oakland. California. “Many of the patients were not older vets but young ones with various health issues or injuries,” McCord said. “Many were not much more than boys.” She went on to make the service a career and was married to a Navy officer.

These were just a few of the veterans out of a convoy of over 50 vehicles. Each veteran had a story and many had seen combat during their time in service. All were there to honor their fallen comrades or family members.

While many of this year’s Memorial Day ceremonies were cancelled due to COVID-19 concerns, Turkey Creek residents ensured that veterans were honored and the fallen were not forgotten.