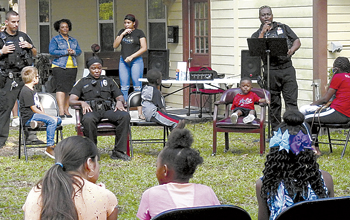 HIGH SPRINGS – On June 17 three police cars parked at a local church with lights on as a group of youngsters gathered around. Police departments and the religious community are joining forces locally in the midst of controversies and demonstrations occurring over policies and actions by police, especially within African American communities. Deaths of unarmed blacks by police in different areas of the country have in some cases created anger toward the police.

With turmoil and negative press regarding police, local police departments want their communities to know them as people not just uniforms. Throughout the year police departments in Alachua and High Springs interact and connect with the community. Each year the High Springs Police Department (HSPD) and Fire Department distribute Christmas gifts to kids who might otherwise have no Christmas. They also host an annual community fair to meet and interact with residents in a non-stressful situation. The Alachua Police Department (APD) is heavily involved with local schools and programs for at-risk children. At Christmas they arrange the “Shop with a Cop” event taking a group of children on a Christmas shopping spree to Walmart using donations.

These are just a few of the things police officers do on their own time to help the community. Unfortunately, it is often the negative actions by a few bad cops that people hear about and the good deeds go unnoticed.

One HSPD officer, Adam Joy, is also an ordained minister. Joy has been a police officer for 13 years, but has also pursued the ministry as a dual occupation. Joy founded Deeper Purpose Community Church in April 2017. Raised in the Church of God in Christ, Joy became a licensed minister in 2007, an ordained elder in 2012, and graduated from Church of God by Faith Theological Institute (CTI) of Jacksonville in December 2018 with his Diploma of Christian Pastor Studies & Certification. His wife, Cherie Muse Joy, assists as the women's religious counselor at the church.

The church has separate programs geared toward youth. Deeper Purpose Youth & Student Ministries (DPYSM) was founded in February 2015 by Joy, who in the months leading up to its founding, would take a portion of his paycheck from his full-time job as a police officer and put it toward youth related activities, outreach, and projects. Friends and family also began to donate. Joy says that since being founded, DPYSM has poured thousands of dollars back into communities in and around North Central Florida.

Each Wednesday, the church holds a separate service for youth with different themes or activities each time. With the controversy occurring over police relations, Joy invited several officers from the High Springs and Alachua police departments to attend a Community Youth and Police Relationship Summit for a question and answer session with community youth.

On June 17 local police and the ministry united at the church as a circle of chairs filled with youths between ages 6 and 17 sat in front of the police cars parked at the church with lights on. “The purpose of this special night was to bridge the gap more and to build more trust and understanding between our community’s youth and law enforcement, as well as building better relationships between the two, by engaging in conversation,” Joy said. “I feel that good lines of communication between our youth and law enforcement are important for the trust of the community and understanding of who each person is.

School Resource Officer Jason Taylor and Officer Joe Tillman from High Springs Police Department, as well as Tiausha Brown from the Alachua Police Department, attended. An interactive discussion followed with both youth and officers asking and answering questions to better understand viewpoints from each. But the gathering also offered recreational activities as Officers Tillman and Brown faced off against the teens in basketball. Officer Taylor let the smaller youth play games with K9 Justice. Pizza, subs donated by High Springs Subway, cupcakes, chips and drinks were a popular addition to evening’s activities.

“This was originally going to be a one-time event, but it went so well that I would like to make it once every three months, so everyone can address issues that are current,” Joy said.