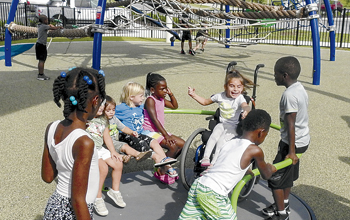 ALACHUA – On Wednesday July 1, the City of Alachua issued a call to action to all children regardless of abilities to have fun.

The City held a ribbon cutting in Legacy Park to officially mark the opening of an all-inclusive playground. On hand to witness the event were City of Alachua Commissioners and officials, State Representative Chuck Clemons, and members of the public, including children of all ages.

The all-inclusive playground is different from traditional playgrounds and is designed to remove barriers that exclude any child due to physical, social or other limitations, and provides a place for children of all abilities to play and interact together in the same environment.

Most playgrounds are designed for the majority of kids and can often be limiting to those children with physical or mental limitations. While many places have separate areas for children with limitations, this playground is designed to include everyone and improve social interaction for all children.

“Statistics show that nearly 15 percent of all playground-age children have some form of physical or social limitation,” Alachua Communications Director Mike DaRoza said. “In Alachua, we feel that any child with these types of limitations is cause enough for our community to provide an inclusive playground.”

Prior to setting plans into action, city staff looked at playgrounds around the state to get ideas on what to revise or keep for a better more inclusive playground. “Most of our neighborhood parks were designed for the majority of kids in that neighborhood, and we needed a bigger space to build a new one. With the expansion of Legacy Park to 105 acres, that became a perfect location,” DaRoza said.

While the City of Alachua Master Plan included a playground in the expansion of Legacy Park, it was not considered an all-inclusive playground for kids with disabilities, but that plan would change. About a year earlier, the City was approached by local resident and mother of three, Susan Sloan. While her children were grown, she had seen inclusive playgrounds in other places and suggested it to the City Commission and City Manager.

The design was revised to accommodate an all-inclusive playground. Sloan was actively involved in the meetings, planning and design, often finding other inclusive playgrounds while traveling to see what worked and what didn't. Funding for the playground included a Wild Places and Private Spaces grant as well as individual donations to supplement City funds.

The new playground is different from the ground up and has a poured in place surface that allows for easy wheelchair access with various points of entry. The surface material is softer than dirt or concrete with specific softer fall pit areas around the equipment to lessen the chance of injury. The equipment is custom built to allow access by all children. The merry-go-round is level with the ground to provide easy access for wheelchairs and individuals with other disabilities. The swing set features a variety of swings geared toward different needs. There is also a quiet area where kids can go to reflect and enjoy a calming environment. The large jungle gym/slide includes talk tubes for kids in different sections to communicate. All play areas include sensory elements for touch, sound and visual experiences for children, features that were specifically added to create an environment that meets individualized abilities.

Alachua’s inclusive playground also takes into account Florida’s hot, humid weather, incorporating a feature that many playgrounds do not. “Since the heat and humidity can be high in the summer when most children are off school, the City wanted to limit the possibilities of dehydration and heat exhaustion and put coverings over all the equipment,” DaRoza said.

“The ultimate reason for the Legacy Park Inclusive Playground is to remove barriers that exclude any child due to physical, social or any other limitation, providing a place for children of all abilities to play and interact together in the same environment.”