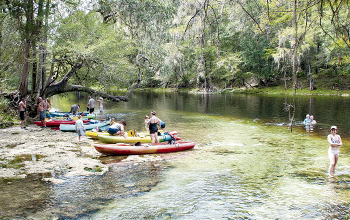 HIGH SPRINGS ‒ Alachua County’s popular Poe Springs Park will soon be closing for construction and improvements. The closure will start Tuesday, Sept. 14, except for the boat ramp. It is anticipated that construction will stretch until January 2021. There will still be a $5 vehicle entry fee for the use of the boat ramp.

The 202-acre park on the Santa Fe River is near High Springs on County Road 340. Poe Springs is rated as second-magnitude in terms of the water that flows out of it — about 45 million gallons a day and is the largest spring in Alachua County.

A popular weekend recreation area, the property includes a playground, volleyball courts, sports fields and nature trails. It also includes pavilions and picnic shelters with bar-b-que grills. There is also a lodge building for event rentals, such as parties, family gatherings and small weddings. There is a full-service kitchen in the building which is included in the rental fee. Restrooms are on-site, and there is additional picnic table seating under the attached pavilion. There are loop trails throughout the park for hiking, and a boardwalk that traverses the cypress swamp that leads visitors to the springs. A boat launch and dock afford watercraft access to the river for boating kayaking, tubing and fishing.

The spring itself has a large area for swimming, relaxing or snorkeling in the year round 72-degree water. The crystal-clear spring water feeds directly into the Santa Fe River.

The park has a rich history spanning nearly 70 years of inviting people to enjoy nature and water-based recreation. In the mid-1940s Poe Springs was a commercial recreation site with bathhouses, refreshment stand, and picnic facility, but it fell into disrepair in later years and most of the buildings were taken down.

Poe was privately owned until 1985 when the initial 75 acres was purchased with a federal grant from the land and water conservation fund. Additional acreage was acquired by the Suwanee River Water management District (SRWMD) and additional grant funds in the 1980s. In 1987 the county obtained a permit to dredge the spring boil from a depth of 12 feet to 25 feet. Four years later, in 1991, Alachua County finished construction and opened the park to the public.

Alachua County shut the park again in December 2011 for a construction project that included a new retaining wall and steps in the spring-fed swimming area, new landscaping and new roofs and air-conditioning units on the buildings and pavilions. It reopened again on July 4, 2013 with no admission charge four days a week Thursday through Sunday.

Although Alachua County owned the park, it was a barebones operation and the county and High Springs made arrangements for the city to run the park.

It closed again in 2017 due to damage from Hurricane Irma and opened again in May 2018 after repairs were made but on a shorter weekend only schedule of Friday to Sunday, but was still free to visit.

Then came the COVID-19 pandemic and the park closed again under state quarantine in March 2020 only to open again three months later with a $5 per car fee to help maintain the park and pay employees.

But more repairs and upgrades are still needed. The boardwalk, which winds through a wetland to the spring, was severely damaged by Hurricane Irma in September 2017. It was repaired enough to make it usable, but it will now be widened in compliance with the Americans with Disabilities Act, heightened and lengthened to the spring.

During the closure, the work will include widening and lengthening the boardwalk to the spring, replacing the canoe/kayak launch and replacing the restrooms. Contractors will also be required to install silt fencing to protect water quality and the process will be monitored by the county.

An infusion of cash from the federal government and a local tax will pay for upgrades at the park. Funding is provided jointly through Federal Emergency Management Agency (FEMA) and Alachua County’s Wild Spaces Public Places tax. FEMA will kick in $280,665 while the county’s share is $284,152.

The expected reopening date is mid-January 2021.