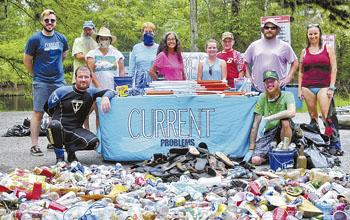 HIGH SPRINGS ‒ North Central Florida is known for its pristine natural beauty and recreation based around the springs and rivers in the area. The rivers are popular spots for swimming, diving and boating by kayak or canoe and for group get togethers. Unfortunately, not everyone helps maintain the natural beauty they enjoy, discarding their trash in the river and on the surrounding banks.

The trash is not only unsightly and disruptive of the natural beauty, it adds to the pollution and degradation of the environment and river system. This is especially problematic for parks offering group recreation leading to group partying and an increase in trash at sites like the popular Ginnie Springs and other parks along the river.

Several organizations and individuals have taken it upon themselves to organize cleanup events with volunteers using kayaks to reach the banks and surface of the water and scuba divers to clean the river bottom. Often the cleanups are a combination of several groups to make use of more volunteers.

On the weekend after Labor Day, Our Santa Fe River organization (OSFR) teamed up with Rum 138, Current Problems, Trail Trash Outdoors, Anderson’s Outdoor Adventures and scuba divers James Merritt and Joe Miller along with other volunteers to do a large river clean up.

Current Problems, a Gainesville based non-profit organization, works to clean the waterways of North Central Florida not only by holding frequent cleanups but by also providing outreach and educating the public on water quality issues. So far, Current Problems has removed 888,000 pounds of trash from area rivers.

Rum 138, which is where OSFR is based, provided four free kayaks and transportation for those with their own canoes. Rum 138 also offered additional kayaks at a reduced rate of $15 per volunteer, young or old. That also included paddle, vessel, life jacket in tandem kayaks, canoes or single kayaks. Also included was shuttling services to and from the river. Anderson’s Outdoor Adventures also provided kayaks for the volunteers.

Brothers Travis and Maverick Smith founded Trail Trash Outdoors. They duo organized the event and filmed the efforts for their YouTube Channel and Facebook page. The brothers have been going on the river weekly since December in an effort to make a difference in the environment.

“High Springs is our home,” Maverick said. “We grew up here and want to help preserve this natural beauty for our kids and future generations to enjoy.”

The brothers started Trail Trash Outdoors after a hike in North Carolina mountains where they witnessed the large amount of trash people left beside the trail. As they hiked, they gathered the trash into piles and then removed it on their way out. “The whole way home we discussed it and when we got home and went on the river, we realized the same problem existed here so we decided to do something about it,” said Travis.

Each week they go down the river and film their efforts for their YouTube channel, which is a blend of tag-along camping footage, adventure hikes, trash cleanups and even a survivor challenge where the brothers race to see who can build the best fire the fastest. “We want to make the world a better place by removing trash from our environment,” said Travis. On their weekly cleanups, other kayakers and swimmers in the springs watch the pair travel through using their garbage grabbers. The brothers like to remind tourists that the bottled water they drink comes from the very springs they are hauling this trash out of.

They are not the only ones filming their efforts. Divers James Merritt and brother-in-law Joe Miller also have a YouTube channel and Facebook page, “Into the Water with James.”

“I noticed the amount of trash in the water and decided to do something about it and make the public aware of the problem by filming our dives,” Merritt said.

Not everything the divers find is trash. “We find a lot of cell phones, sunglasses, watches and shoes—items people drop when leaning over their boat to take photos or capsize,” said Merritt. “Any items we can't return we see as a little bit of profit for our efforts. I have more sunglasses than I know what to do with. Occasionally we have even found car keys, which means somebody, especially a tourist, is having a really bad day.” Merritt said.

Volunteers met at 8 each morning at Rum 138 for the cleanup day. On Saturday, 28 volunteers gathered at Rum Island Park between 9 a.m. and 10 a.m. to float downstream to Hollingsworth Bluff Boat Ramp. On Sunday, participants gathered at the U.S. Highway 27 Bridge and paddled downstream to Rum Island Park, collecting trash as they went. At Hollingsworth Bluff Boat Ramp, a dumpster was provided by Current Problems with assistance from Columbia County.

On Saturday the group collected 274 pounds of trash and 138 pounds on Sunday. “However, with the river being so high, it means there’s a whole world of trash we still weren’t able to reach but have goals to attack in the near future,” said Smith. “We found a good bit of trash but not as much as we would like.”

The groups are planning to do another major clean up in late October or early November. Anyone interested in joining or getting more information can contact one of the groups through their Facebook pages or contact Rum 138 at 386-454-4247.