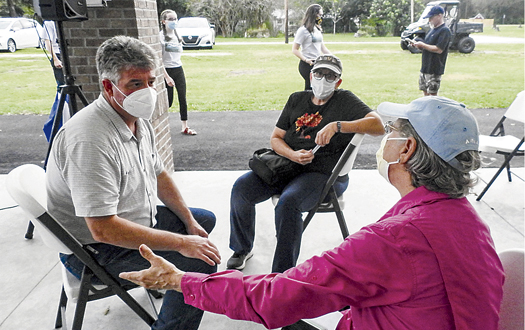 HIGH SPRINGS ‒ City of High Springs voters will be choosing between six candidates to fill two open seats on the High Springs City Commission in the upcoming election. On Oct. 20, these voters had an opportunity to hear from each of the candidates running for spots on the commission.

All six candidates gathered at the new Farmers Market Pavilion for a meet and greet event to share their views with residents. The first half hour was spent with the candidates talking individually to the public before taking seats at a long table decorated with patriotic colors.

The event was sponsored by the GFWC High Springs Woman's Club to help inform citizens of candidate options and the difference between them. Once the candidates were seated at the forum, each one was presented with three question supplied by the moderator and each had two minutes to respond to each question.

Questions ranged from the three most pressing issues facing the city to deteriorating buildings to city services and economic development.

Candidates for seat one are Ross Ambrose, Sharon Decker and Janet Evans. Ambrose believes it is important to manage growth while also maintaining the small-town identity and balance the environmental needs of the river system with growth and increased tourism. He also said it is necessary to pay city employees and first responders enough to retain them to keep consistency in government. Sharon Decker echoed those concerns and believes that public safety is an important issue, especially in making sure first responders have the staffing and equipment they need to properly do their job. Janet Evans believes in small government that can focus on the specific issues facing citizens, with priority on managing growth and infrastructure.

Seat two has three candidates as well. Gloria James is presently a commissioner and is running for reelection. She is currently Vice Mayor and believes that her experience as part of city government gives her a better understanding of the issues facing the town and its expanding growth. Zachary Walters is the youngest candidate and believes that bringing more employment and jobs to High Springs is important. While he favors more jobs, especially in higher tech industries, he also wants to make sure growth is well managed to maintain the small-town feel while also offering incentives to keep youth from leaving. Engineer and scientist Kathrine Weitz expressed concern over aging water and wastewater system infrastructure. With the expanding population growth in the area she believes the City needs to address improving a system that is already overburdened and outdated. She also spoke about the cost and getting back to long-term budget planning for future growth.

In a time when political debate is heated, this forum stood out for its civility and mutual respect among the candidates..