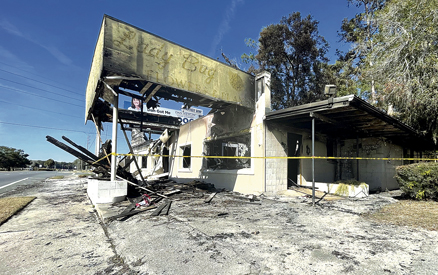 The burning 4,500-sq. ft. building required the use of multiple hose lines and an aerial unit to bring the blaze under control. High Springs Public Information Officer Kevin Mangan reported that the High Springs units were on-site until 4:32 a.m. the next morning. The blaze is being investigated by Alachua County Fire Investigators.

In High Sprigs a large trash WCA truck caught fire on Jan. 15 in the High Springs Industrial Park off of Poe Springs Road. When the High Springs Fire Department arrived on the scene the truck was fully engulfed. The blaze was so intense that the cab and steering wheel had melted. Fire fighters had to cut into the side of the metal compactor in order to extinguish that blaze.

According to Mangan, it took about four hours to bring this fire under control. “The cause of this fire is unknown,” he said.

Also in High Springs, on Jan. 5, a High Springs couple found themselves at the bottom of a 40-foot sinkhole. The pair was driving a Dodge Caliber behind EarthWorx and suddenly found themselves in water. Luckily, the couple had the windows open when the vehicle landed in water and both were able to escape.

The male was eventually able to make his way to the top of the sinkhole and walked to the S&S Station on Poe Springs Road and Main Street where he called for help at 7:21 a.m. High Springs Fire Rescue went to the scene and was able to extricate the female.

“Luckily, there were no injuries in any of these incidents,” said Mangan.