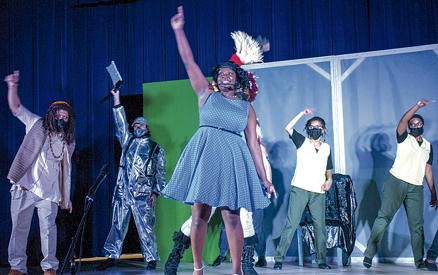 ALACHUA ‒ It was a magical evening in Alachua as The Wiz played to a full house. Live theater, like the other performing arts, have been limited by the Covid-19 pandemic. But the show must go on, and on Jan. 30 a local production of “The Wiz” played to a socially distanced, sold out audience at Legacy Park in Alachua.

While many of the planned events at the new $8 million facility amphitheater and multipurpose center have been postponed due to health concerns. The City of Alachua partnered with the Star Center Theatre to present the critically acclaimed Off-Broadway show. The City works with various community partners throughout the year to present free performances to the community.

To stay within health safety guidelines, temperature checks were taken at the door. Members of the audience, stage crew and the actors all wore masks with chairs set six feet apart to maintain social distancing. The event was free, but audience members had to reserve seats by registering online to maintain a limit on audience size.

“The Wiz” is a critically acclaimed Off-Broadway musical based on the Wizard of Oz story, but is a more ethnically diverse version to modernize the story. Dorothy, an African American Kansas farm girl, is eager to see more of the world, and is transported by a tornado to a magical world of Munchkins, witches and a yellow brick road.

All the actors and stage crew were members of the The Star Center Theatre, a Gainesville-based community theater that was founded in the summer of 2000 by Rhonda Wilson to offer children and adults a chance to become involved in theater and learn confidence in themselves.

Originally the focus was on children and working with a culturally diverse group to provide opportunities in the arts that they might not be exposed to in their community. In the beginning, programs and classes in acting and dance were offered in a small space in an after-school center.

Programs continued to expand and the community began to recognize and support The STAR Center as Gainesville’s Children’s Theater. Over the years The Star Center continued to expand. Currently, Star Center is housed in a 7,000 sq ft renovated space with a rehearsal and meeting rooms. Prior to the Covid pandemic Star produced a full season of performances, classes and workshops for children and adults.

Although many live performances in theater, dance and musical have been cut back due to the pandemic, the STAR Theatre has adjusted to the safety concerns, maintaining sterilization in their own theatre auditorium and doing all performances and rehearsals in masks.