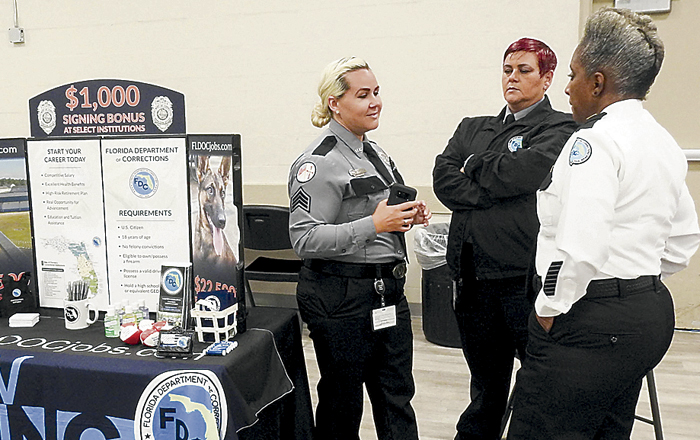 HIGH SPRINGS ‒ Area employers are having a tough time meeting labor needs and are looking for ways to reach prospective employees. A job fair in High Springs this past weekend was just one step these companies took to attract much needed workers.

The COVID pandemic had a devastating effect on the economy and employment. Prior to February 2020 the unemployment rate had hovered around 4 percent for the previous four years. But when the pandemic hit, the country shut down. People stayed home, quarantined to avoid infection. Many businesses, especially service industries like restaurants and retail stores, were forced to reduce staff due to lack of business, which then affected numerous other industries. By May 2020 the unemployment rate rose to 14.8 percent and over 33 million Americans lost their jobs.

While this money helped many survive it also had an unexpected result. In Florida where standard unemployment benefits range from $32 to $275 per week, the addition of the $300 for an extended time created a situation where low-income workers were financially better off collecting unemployment than returning to work. And many workers had found other ways to supplement income by working from home in new entrepreneurial jobs.

As the nation began to recover economically due to a massive effort to vaccinate the population, businesses again opened up and unemployment has dropped to 5.8 percent with 9.3 million Americans still out of work. As employers began hiring again, they ran into an unexpected problem. There are plenty of companies hiring, but few people were applying. The jobs are there—the workers are not.

Andrew Miller runs Poetic Cuts, a small barber shop in High Springs. As the economy improved, he looked to expand his business and hire employees, but received no applications. Throughout the area he saw multiple signs offering jobs but few takers.

Miller believed it would take a concerted effort and a single location to make people aware of available jobs in the area. He approached local businesses including Radiant Life World, which owns several restaurants, including the Great Outdoors and Pink Flamingo. They discussed the situation with the Chamber of Commerce and High Springs Parks and Recreation Manager Damon Massina. Out of these discussions came the idea to host a job fair at the High Springs Civic Center on June 22.

Over 25 companies had expressed interest in attending, but bad weather served to lower the number of participants. “It's a rainy day, so we lost a few companies that didn’t show and turnout has not been as good as we hoped, but overall, I think this has been beneficial and has helped those that are interested in finding work,” said Deborah Simone, HR manager for Radiant Life. “I think most businesses have been surprised at how hard it is to find new employees. Our restaurants have been understaffed and had trouble finding qualified employees. We are hoping by holding the job fair, we can help people find jobs,” Simone said.

Many of the attending companies expressed similar feelings. Sgt. Park with the Florida Department of Corrections (DOC) said he was somewhat baffled by the current situation. “When I joined the DOC, jobs there were so few that I had to wait six months until another employee retired,” Park said. “We had a reduction in the work force due to the Covid pandemic and are now understaffed. We are not only offering jobs, but sign on bonuses as well.”

Several other companies at the event echoed surprise at how hard it has been to find employees. Representatives from Whitfield Windows and Doors, North Central Florida Air Conditioning, Domino’s Pizza, Smith and Sons and Pinnacle Site Solutions all shared similar experiences.

Dan O'Neal with Natures Source, which supplies firewood to Lowes, Home Depot, Publix and various restaurants, believes the problem is directly related to the stimulus and unemployment benefits. “Unlike some other companies here, we hire unskilled workers that do not need previous training, but we still have plenty of positions available,” he said. “I am amazed at the lack of people actually looking for work that are still unemployed.”

Several of the companies reported not being understaffed, but have seen a large increase in business with the improving economy and need to expand their work force.

Although the weather affected turnout this time, companies are still looking to hire and this may not be the last job fair opportunity.