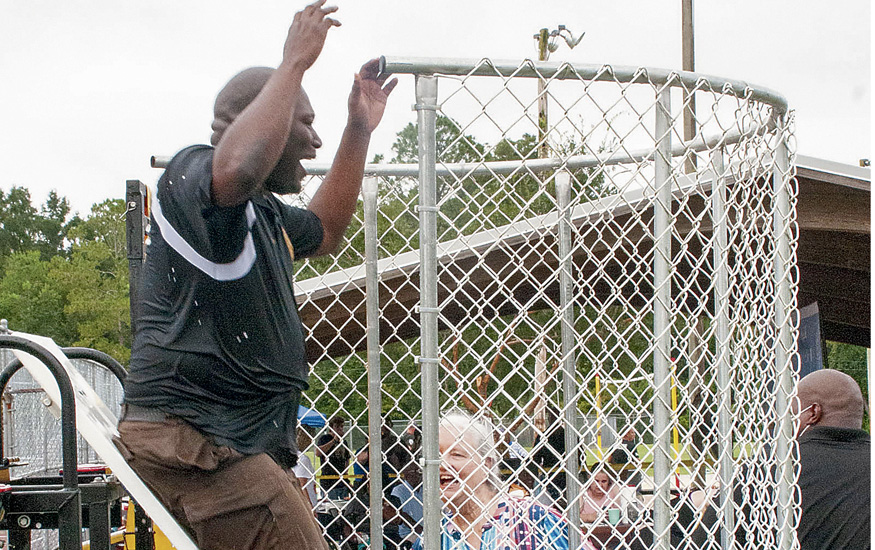 HIGH SPRINGS ‒ The High Springs Police Department (HSPD) and the City of High Springs teamed up once again with area organizations to host the annual National Night Out on Tuesday, Aug. 3. High Springs is one of 100 communities in Florida that sponsor a National Night Out event. Every year first responders and city staff host the event at the Civic Center field. This year starting at 6 p.m., a line of police and fire vehicles parked with lights flashing for kids to explore along with prizes and games sponsored by local civic organizations.

For the past 38 years, on the first Tuesday in August, communities throughout America hold a National Night Out event. Over 38 million neighbors take part in National Night Out across 16 thousand communities from all 50 states, U.S. territories and military bases worldwide getting together for an annual community-building campaign that promotes police-community partnerships and neighborhood camaraderie. The goal is to build relationships with local police and neighbors in the community to make neighborhoods safer, more caring places to live.

The events are usually organized by block watches, not-for-profits, businesses, and police departments. They may be as small as a backyard barbecue or as large as a full-blown festival. Whether they’re big or small, these events impact each neighborhood in positive ways and improve communication and trust between the community and their first responders,

This year’s High Springs event was under threat of thunderstorms that had been passing off and on throughout the day, but the rain let up in time for the 6 p.m. start time.

The event is a fun festival with community interaction, and is especially geared toward children. In addition to the line of police cars was a large bounce tent and a pool filled with water balloons for the kids. The Kiwanis set up a booth where kids could “fish,” with a Kiwanis member making sure every kid got a catch and a prize. The High Springs Women’s Club offered prizes for playing a bean bag game. Children could also get their faces painted in a variety of colorful themes. Under a tent, in case of rain, a long table was filled hot dogs, pizza and hamburgers for the crowd to enjoy as well as a food truck offering Italian ice.

By far though, the favorite game was a dunking machine where people got a chance to dunk a police officer in a water filled tank by hitting the bullseye with a baseball. Everyone was a winner as it didn’t take skill or size to dunk the officer. If a kid missed, they could hit the target with their fist, dunking the officer regardless. The biggest crowd, including many adults, gave it a try when HSPD Police Chief Antoine Sheppard took a turn in the dunk seat.

It was not all games though. The police department gave advice for safety, drug issues and neighborhood crime prevention as well as tours of the police and fire vehicles. They also provided a demonstration of how a well-trained police dog is used to subdue suspects.