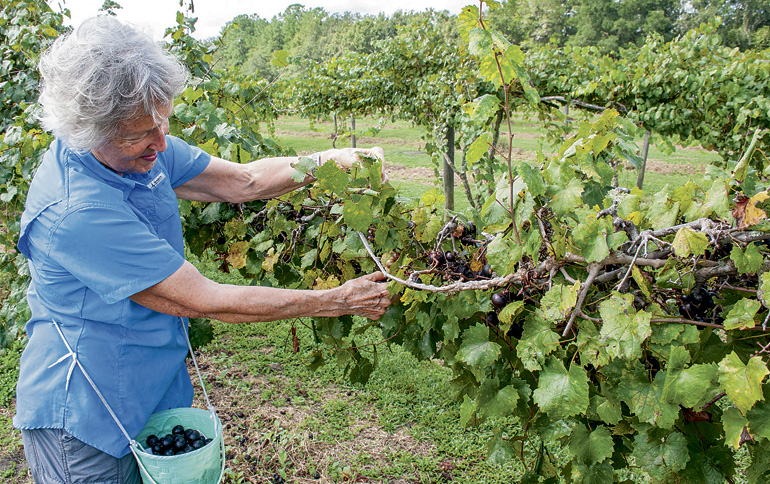 ALACHUA ‒ It’s harvest time, for grapes that is. Every year in late summer, Muscadine grapes ripen throughout the southeastern United States. Harvest season runs from the last week of July to early October, depending on location. They are unique to the Southeast from as far north as Kentucky and as far west as East Texas. They are a popular snack, good for making muscadine wine, pies and jellies. The thick skin and grape’s taste is sweeter than ordinary commercial grapes available in stores

During the short harvest season there are several local farms that offer the unique experience of picking your own grapes. Don Loftus started The Vineyard at Loftus Family Farm in 2004 with just three rows planted. The venture was meant to be a way to make some extra money when he retired and have an activity to keep him busy.

Originally the idea was to grow grapes to sell commercially. Each year he added a few more rows of vines until they covered 1.6 acres. The idea was to get started while he was still working so the vineyard would be ready once he retired, since a vine is not considered in full production until its fifth year.

By the time all the vines were planted, there was so much to keep track of that all other activities and hobbies were put on hold while Loftus spent holidays, vacation, and most weekends working on pruning, weeding, fertilizing, irrigating, building trellises, pulling wire and making repairs.

Don Loftus retired in 2010 and concentrated on the vineyard along with the help of his son, Curtis. Word had spread about the vineyard and friends began asking to come by and pick grapes, As the list of customers grew, the Loftus family realized it could become a business letting other people do the harvesting and pay for the grapes so they could concentrate on maintaining and expanding the vineyard. They also expanded the variety of Muscadine grapes with Ison, Supreme and Purple Rhine vines. Over the years Don turned over most of the farming work to Curtis who now runs the business.

“Even though the picking season is short, there is a lot of year-round work to maintain the vineyard and the “you pick” system seemed like a way to remove the harvesting work and let people enjoy themselves,” Curtis Loftus said. “We found people really enjoyed coming out and picking the grapes themselves. For a number of our customers, it became an annual event and many of them come every year. My father started an email list of customers to notify and there are now over 500 names.”

Customers George and Karen Arola agree about enjoying picking themselves. “We come every year,” Karen Arola said. “It’s a chance to get organically grown grapes and spend an afternoon outside enjoying ourselves while we gather the grapes.”

The picking season brings out a lot of customers.  According to Loftus, they often run out of grapes before they run out of customers, even though the vineyard produces between 4,000 to 5,000 pounds per season. “We used to be open for six to seven weeks, but as word spread and the customers increased, the picking season has shrunk,” said Loftus. “We will probably be out in three to four weeks this year.” Loftus said the first day the vineyard opened on Aug. 28, they sold over 2,100 pounds for $1.75 per pound.

The vineyard is now run by Curtis Lotus and his girlfriend, Katie Rodgers “It’s a lot of work, especially since we both have full time jobs as well,” Loftus said. At his fulltime job, he works with his brother, Ryan, at real estate company Lofthouse. They specialize in buying derelict properties to rehab and then rent or sell at affordable prices for first-time buyers or rentals at reasonable prices. “The idea is that for many people on a fixed income, owning a house has become too expensive, shutting them out of the market and unable to get a large loan.” The Loftus brothers repair the houses and clean the properties to help raise the desirability and image of the neighborhoods.

But his passion is the farm and vineyard. They have installed an automated watering system that irrigates the rows on a rotating system and have plans to expand the vineyard from the current 1.6 acres to over 2 acres. They are also considering expanding to other produce such as okra and persimmons.

“With our other jobs, and the extensive work it takes to run a farm year-round, we are only looking at expanding to plants that ripen in the same time period as the grapes,” Loftus said.” But we really enjoy interacting with our customers and seeing them enjoy the picking process. With some of our regular customers it becomes a yearly family outing involving the kids as well.”