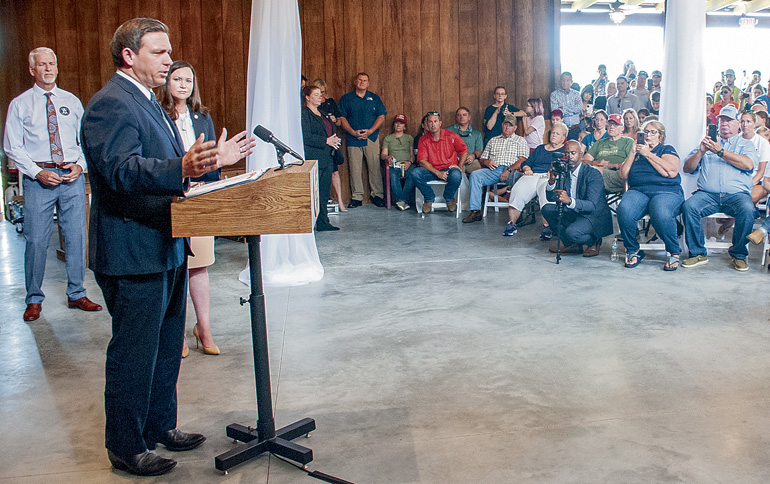 The event was originally planned for Alachua’s Legacy Park but was moved to a private Newberry venue reportedly to avoid public protests against the Governor's Covid regulations and restrictions. Despite the short notice, the venue was standing room only attended by a maskless crowd.

DeSantis and other officials spoke of the importance of considering vaccination, but said that the ultimate decision should remain with each individual. “This is not something that should be coerced onto people, it should be left to personal choice,” DeSantis said. “It should be something that they have access to and they can make that decision for themselves.”

Governor DeSantis made it clear that he is not against vaccines, but against mandates and he’s prepared to punish agencies like the City of Gainesville that are requiring vaccines by fining $5,000 for each violation of his orders.

“In a place like Gainesville, which has mandated vaccines for all employees and currently has 200 employees involved in a lawsuit against the mandates, that could be millions of dollars of their tax revenues,” DeSantis said. This comes after DeSantis withheld salaries of school board members in school districts that have mask mandates, including Alachua County, and recently passed a law prohibiting businesses from requiring customers to prove vaccination.

Most requirements from businesses, school systems and city governments have been in response to the recent surge in the more infectious Covid-19 Delta variant. Florida accounted for 20 percent of the cases in the U.S. during August. Cases are beginning to drop, especially in counties that have stricter masks or have higher vaccination rates. Alachua County has a higher vaccination rate at 67 percent and a positivity rate of 11.8 percent compared to the statewide rate of 13.5 percent. The county had 36,610 cases overall and dropped by 200 cases last week to a weekly total of 1,277.

The City of Gainesville is requiring all City employees to be vaccinated by the end of October or face disciplinary action with repeated incidents possibly resulting in termination. Alachua County and other cities in the county do not have as stringent requirements, but do encourage employees to get vaccinated. According to Alachua County Communications Director Mark Sexton, Alachua County employees are required to wear masks in buildings or in interactions with others, but neither testing nor vaccinations are mandatory. “We offer employees a $500 incentive to take the vaccine and offer free testing as well as paid time off if they catch the virus after getting the vaccine,” Sexton said.

Several City of Gainesville employees and firefighters spoke about the demand for vaccinations being an infringement on their freedom and a threat to their jobs. Christine Damm, who has worked for the City of Gainesville for 10 years, said she believes that it is nobody’s business if the person you’re are seated next to is vaccinated. She also repeatedly defended that position with a phrase often used in the pro-abortion issue of “My body, my choice, my business.”

Fire Rescue Lt. Jonathan Cicio is a 16-year department veteran and a member Florida’s Urban Search and Rescue team. He assisted in the Surfside building collapse in June as well as in the Bahamas following Hurricane Dorian in 2019. “We feel betrayed and used,” Cicio said. “While we were heroes and selfless not long ago, now we’re selfish and they’ll let us go. We are not anti-vaccine; we are anti-mandate.” Cicio also said many first responders “have natural immunity because of exposure.”

DeSantis said those who have recovered from COVID have “very strong immunity and are now safe.” Studies have shown that the immunity from having had COVID is not long lasting and there have been multiple cases including health workers who have had severe reinfections. In addition, they can still be a carrier and potentially infect others.

GRU employee Darris Friend claimed it was a loss of freedom that is being taken away slowly on multiple fronts, including religion.

Loud cheers erupted from the crowd when Florida Attorney General Ashley Moody spoke against Gainesville’s employee vaccine mandate, offering support to the employees who have filed the lawsuit against the City, saying, “You now have the attorney general and the state of Florida in your corner.”

Since the announcement last week of the federal government requiring the vaccine in certain instances, Congresswoman Kat Cammack said she’s using her power to “fight for what’s right.” She promised to fight against President Biden's planned vaccine mandate for some private employers. “I will use my power as a member of Congress to ensure any locality that infringes upon an individual’s personal medical choices will no longer receive federal funding.”

DeSantis said he does not believe the mandates are productive and are likely to have the opposite effect on people, forcing them to “dig in their heels” as they continue to question government officials. He also focused on the potential for lost jobs if employees still refuse to get vaccinated and get fired, especially among first responders.

“Thousands upon thousands could lose their jobs, pensions and livelihood, not based on performance but on illegal policies demanding vaccines.” DeSantis said that could cause a shortage of dedicated first responders and medical staff. He also said he believes that the “supposed shortages” of ICU beds is partially due, not to a shortage of treatment facilities, but a shortage of staff who have quit due to mask and vaccine mandates.

Unvaccinated individuals account for nine out of 10 of hospitalizations, and there are reports that Covid-19 is now the leading cause of death among U.S. law enforcement officers. Last month, 75 percent of the Lake City Fire Department staff were out with Covid or in quarantine. The virus itself has intensified staff shortages for the past year and a half, and has especially affected first responders and medical staff who are in frequent contact with people, often in a crisis situation.

While Governor DeSantis has fined the Alachua County Public School System for requiring masks and demanded in-class learning at school, the Alachua school system currently has 940 positive cases among students and 173 staff, as well as over 940 other student and staff in quarantine, none of whom can attend school.

While the cost of the pandemic may not ever be fully known, it can be counted in lost lives, lost jobs and businesses, and the associated financial cost of long-term health issues. Florida’s Republican leadership wants to eliminate mandates and its associated costs to individual freedom and personal choice.