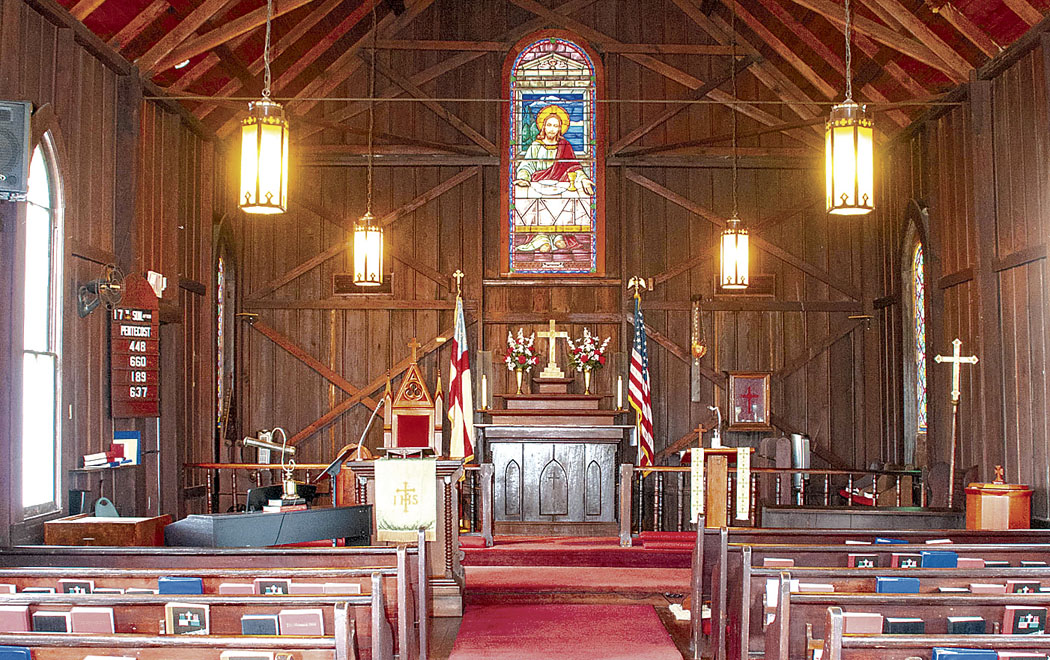 HIGH SPRINGS ‒ St. Bartholomew's Episcopal Church in High Springs will hold a two-day celebration of its 125th anniversary Nov. 6 through Nov. 7 that is open to the community. The church has roots that extend throughout the community and has been holding regular Sunday services for 125 years in its present location, making it the oldest continuous church in High Springs. According to Reverend Canon Lance Horne, the services actually go back further, with the congregation holding services in private homes.

The current location became a reality when a parishioner deeded the land for the church that would be built in the Carpenter’s Gothic style with a steep central gable, wheel windows and pointed-arched windows. At the time, railroads were booming, and in 1883, the railroad had extended from Live Oak to Gainesville, passing through the small community of Santa Fe, named for the nearby Santa Fe River. A post office and railroad station were established, and in 1888, the name was changed to High Springs. When phosphate was discovered in the area that same year, three branches of the Atlantic Coast Line converged in the town which became known as "The Railroad Center."

But in 1896, a tornado devastated High Springs, including the church. The “Great Storm” as it became known, caused 202 deaths and was one of the costliest hurricanes on record at the time. With winds at 125 mph, the storm surge destroyed almost every building on the coast and spawned tornadoes, including the one that devastated High Springs. It was a tragic chapter in the church’s history, but St. Bartholomew's was an important part of the community with its influence extending well beyond its walls, and railroad workers and townspeople worked tirelessly to rebuild the damaged church, cutting down pine trees and even using railroad ties to bring the church back to life. St. Bartholomew's Church became a landmark and an integral part of the town.

Since its reconstruction, the congregation has held two services every Sunday for the past 125 years. This year, the church and community will celebrate the anniversary with a BBQ, music, tours of the sanctuary and original memorabilia along with other activities for children. Speakers include High Springs CRA Coordinator David Sutton who will discuss the early history of High Springs, retired CBS radio host Ben Hill who will be the MC and also speak about the history of St. Bartholomew's, and High Springs City Manager Ashley Stathatos who will talk about High Springs today.

BBQ luncheons will be provided on site by Mr. P's BBQ and the High Springs Lions Club. There will also be a UF Clinical Research Vehicle (CRV) for free health screenings and vaccinations. Julie's Pin's & Needles will be displaying quilts on the back of the pews. To promote the historical aspect of the anniversary, some parishioners will be dressed in period costume. Music will be provided by four acts starting at 11 a.m. until 4 p.m., starting with gospel singers Band Together, followed by Canopy Road, Disney's Alpine Rose Band and ending with a performance by High Springs recording artist Cliff Dorsey.

On Sunday there will be a special service with Bishop Samuel Howard, Bishop Coadjutor of the Episcopal Diocese of Florida, officiating the 10 a.m. service with baptisms, and confirmations along with the church's Reverend Canon Lance Horne. Horne, a career Naval officer with a Master’s degree in Mechanical Engineering and Masters of Divinity, has been the reverend at the church for over a decade. Although he and his wife live in the Mayport area of Jacksonville, they make the trip for Wednesday Bible Study and Youth Services as well as the two services on Sunday.

“Travel time is over two hours, but there are absolutely wonderful people in this congregation,” Horne said. “It’s a family I am proud to be part of it.”