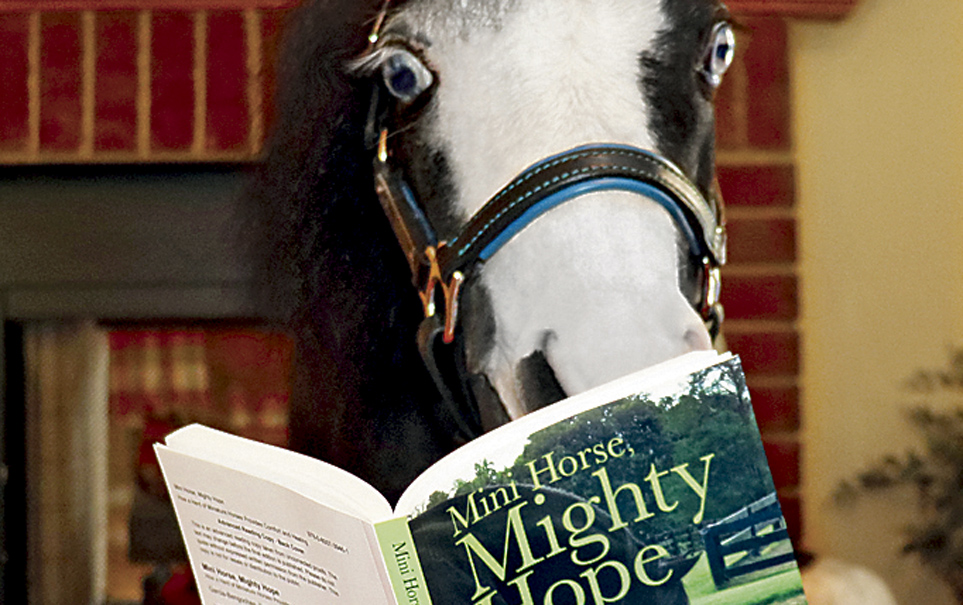 HIGH SPRINGS ‒ The Gentle Carousel Mini Therapy Horses are well known area celebrities. Local children and parents who have met these loving animals in person may not be surprised to learn that the little horses with big hearts are the subject of a new book written about their therapy program. “Mini Horse, Mighty Hope: How a Heard of Miniature Horses Provides Comfort and Healing,” was published by Revell Publishing and released nationally on Amazon and all major booksellers on Oct. 19.

Debbie Garcia-Bengochea and Peggy Frezon co-authored the 200-plus page book about one of the largest equine therapy programs in the world. The book, which already has five-star reviews on Amazon, begins with a first-person account of how the program came about by one of the charity’s founders, Garcia-Bengochea.

The book also includes stories about individual horses and events during the 20-plus years of doing this charity work, including a chapter about the guardian dogs that live with the horses. “Each chapter includes what we learned and individual people we’ve met along the way,” said Garcia-Bengochea.

When the charity went to Sandy Hook Elementary School in Newtown, Connecticut, after the school shootings they experienced so many kind and thoughtful things that people did to make their trip as comfortable as possible. “It was cold, but we had a heated horse ambulance for our horses to help keep them warm. One man made hot chocolate and went looking for us. We were just getting ready to go into the police station when he appeared with the hot drinks,” she said. The book includes simple stories and real-life miracles that happened on that trip as well as others over the years.

“Some of the places we go, we see some pretty tough times that people are going through,” she said. “But in the worst of times you see the best in people. Whenever there is a disaster, people who may be divided in other ways are risking their lives to rescue others.”

Garcia-Bengochea and Frezon had met earlier when Frezon included a chapter on therapy horse, Magic, in her book. “She was fascinated with the horses,” said Garcia-Bengochea. “She came down and visited them. We wound up talking on Mondays and then we began to work together.”

The book includes a story about Terry Lee, a woman who was in her last hours of life at Mount Sinai Hospital in New York. Dr. Elizabeth Mann, Lee’s doctor, asked what she could do for the dying woman. She responded that she wanted to lie in a pasture filled with horses.

As it turned out Gentle Carousel happened to be in New York City teaching a class at Columbia Medical School. The couple brought therapy horse Magic to the hospital into Lee’s ICU room to the patient’s delight. Because the charity was coming to the hospital, television crews were on hand to film Magic’s patient visit. The “Today Show” crew was in Lee’s room. Shortly after their visit Terry Lee passed away, having had her wish granted.

Gentle Carousel had a photograph of Magic in Lee’s room along with her doctor and the Today Show film crew. The charity had obtained photo releases from everyone in the room as always. However, as part of the publisher’s requirements, they required photo releases signed again on their company’s release forms.

The charity had also worked with families at Ronald McDonald House. “We had to locate parents across the country and get updated written permission to use their photographs as well,” she said.

Meanwhile, the authors were working with people from the publishing house. “There was someone from public relations, a cover designer, the editors, a legal team – at least 20 people in all. They have been super supportive,” Garcia-Bengochea said. “It actually took a couple of years between the time they started writing and the Oct. 19 release date.”

The last chapter in the book was when COVID-19 was starting. “We had just returned from New York right before COVID hit there. We were doing an event at the Javits Center for Universal NBC,” she said. “They paid for the trip so we could do our hospital visits on the east coast. Due to the pandemic the Javits Center was transformed into a hospital in the weeks after we left,” said Garcia-Bengochea.

Asked how the book is doing on Amazon Garcia-Bengochea said, “This book is the number one new release in a number of categories and on Amazon Bestseller lists. For Inspirational Books it has been ranked number four on Amazon. We are really pleased with the reviews. They have been very encouraging. Barnes and Noble released the book a few days early, so we began hearing from people before the official release date.”

Usually, when a book comes out the authors schedule a book-signing tour. Due to COVID, that has had to be modified. Many bookstores are not doing in-person book signings. “We are doing creative book signings at outdoor venues,” said Garcia-Bengochea. “We also have had ‘Hoof-o-graphed’ books signed by the horses at book signings.”

Proceeds from Garcia-Bengochea’s share of book sales will help support the horses and the Gentle Carousel Miniature Therapy Horse charity. Garcia-Bengochea said they have had to make temporary changes to the program in light of the pandemic. The couple filmed videos for kids, and they also started doing outdoor reading programs at parks and on library lawns. “We’re constantly trying to find new ways to do things.” The couple set up a studio in their living room in order to conduct “face-time” communication with young patients in hospitals. Children also receive calls from their favorite horse to check on how they are doing at home. “The children are told their horse is calling them to check on them,” she said. “They are delighted.”

The charity has visited assisted living programs for many years. During the pandemic the horses visited with residents through the windows and sent stuffed toy horses inside for each person. “The last picture in the book is of a visit to an assisted living program that was taken at the window,” she said. “We’ve just had to be more creative through the pandemic, but we don’t want people not to see the horses if there is some way we can make it happen safely,” she said. This week the horses will be visiting that same program with residents in an outdoor patio area.

This interview was conducted with local author Debbie Garcia-Bengochea. Co-author of this book, Peggy Frezon, is contributing editor of All Creatures magazine and author of books about the human-animal bond. She's a regular contributor to Guideposts magazine and Angels on Earth. Her stories also appear in books such as "The Ultimate Dog Lover," "Miracles and Animals," and more than twenty Chicken Soup for the Soul™ books. She also blogs at The Writer's Dog. She lives in New York, where she and her husband rescue senior golden retrievers and do therapy dog work. They share their home with two golden retrievers, Ernest and Pete.