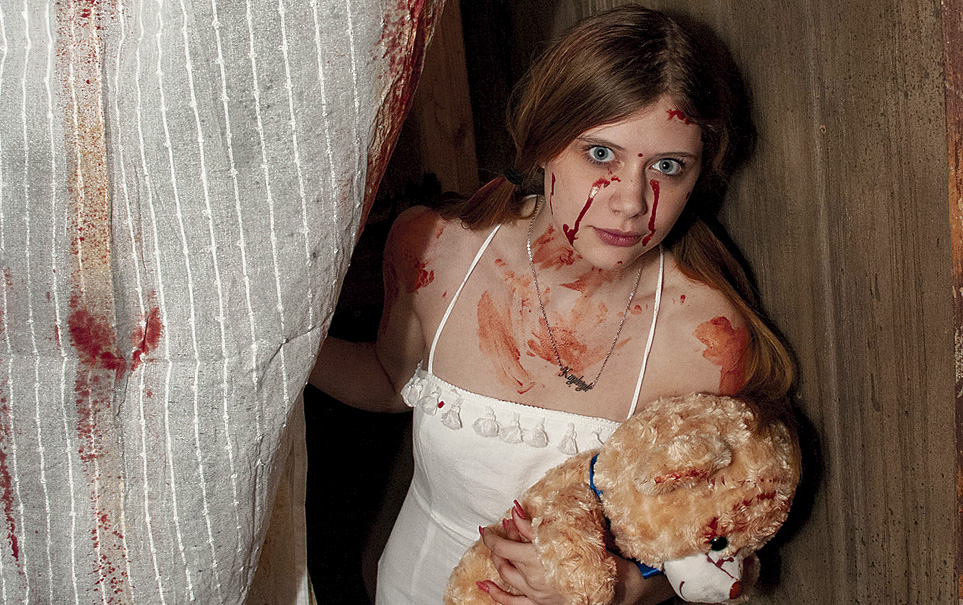 HIGH SPRINGS ‒ To celebrate the Halloween spirit, the Opera House at the Great Outdoors Restaurant became a dark and sinister place, terrorizing all who entered. A dark maze filled with body parts, ghosts, demons and serial killers. But it was all in fun, as the Great Outdoors hosted a haunted house for the holiday.

When Melissa Doring became event manager at the Great Outdoors in July and took a tour of the Opera House space, she saw the potential for it to host special events, especially around various holidays

“One of my first thoughts were that this space could make an ideal haunted house for Halloween. The idea stayed in the back of my mind for several months as I acclimated to my new job, and I finally pitched it to my boss who agreed to let me put it together,” Doring said.

Working with a limited budget, materials and help, she posted on Facebook to see if anyone wanted to help or contribute. “I got a response from Chris Scott, who wound up turning the concept into a reality in a really short time period,” said Doring. “This wouldn't have happened without his involvement.”

Scott has been putting on Halloween shows for over eight years. He was involved with the Madness and Mayhem Halloween specials for several years as well as other organizations. It is his passion rather than profession. “I do it because I love it, said Scott. “To me it’s creating a giant art installation for people to enjoy.”

Scott says that Halloween makes the perfect time for mixing in the heightened emotions of surprise and fear with the entertainment. Over the years he has collected a large number of props, including building a maze that can be adjusted to each different location.

Scott contacted Doring and restaurant owner Baram Kim to discuss combining forces to create a professional quality haunted house in the Opera House. Both welcomed his support. The biggest problem was time as Scott had only learned of Doring's Facebook post a week before Halloween, but the two worked together to make it a reality.

It took two full box trucks to bring all the materials and props Scott had to the Great Outdoors and take it all upstairs. It took Scott and his wife, Bobbi, three days to put it together.

Staffing was another issue since the Great Outdoors staff was busy with the restaurant on a Saturday night. Doring manned the entry point along with her father, Barry Searles, who was dressed as a vampire. Her mother was also one of the characters in the Haunted House. Chris, his wife and daughter were also members of the cast as were three friends and one Great Outdoors employee. There was a $10 entry fee to cover cost and give volunteers some remuneration for their work.

The Halloween theme was also carried over to the Pink Flamingo Diner, which is owned by the same company. The general manager for the two restaurants, Lynn Long, arranged for a red tractor to run hayrides between the two locations. The tractor brought people over to the miniature golf course at the Pink Flamingo to play on the decorated “haunted” golf course and back to their cars. Many of the participants were children in Halloween costumes.

“We put this together in a very short time and thanks to Chris's materials and expertise and the efforts of everyone involved it was a success. We saw 165 “victims” come in to be scared ….and they all came out happy as well,” Doring said.