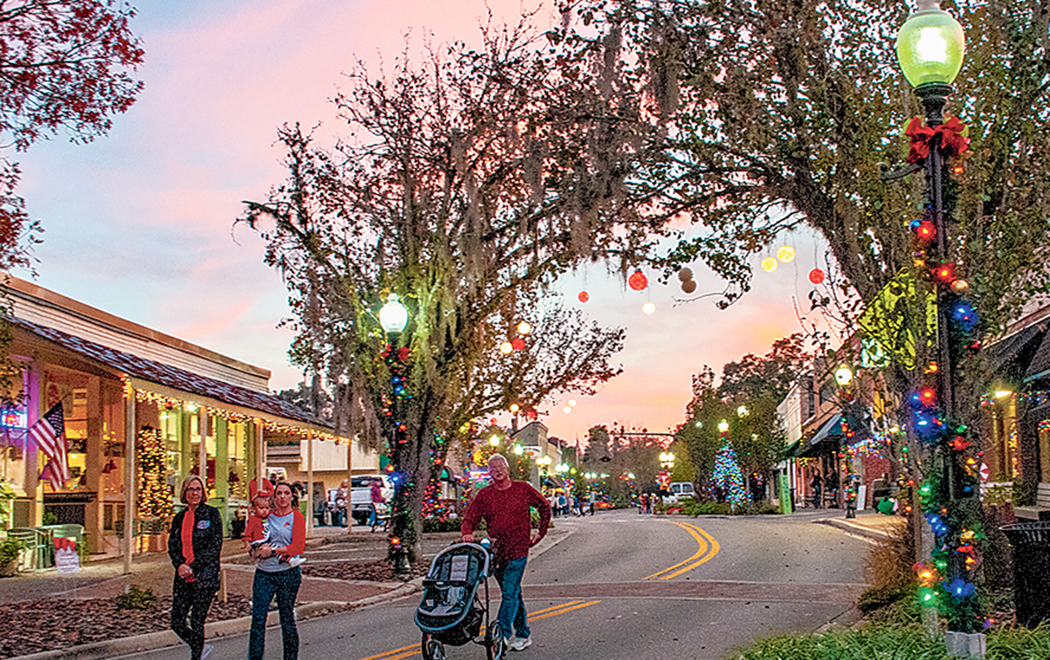 ALACHUA ‒ Alachua is doing it up big this holiday season as events are happening every weekend throughout the month. In 2006, the City of Alachua began holding several events to celebrate Christmas with the community. Longstanding events started the first Friday of the month with a tree lighting ceremony along with a visit from Santa Claus, followed the next weekend by a Christmas parade with brightly colored floats, marching bands, and all sorts of conveyances on Main Street. The event has grown every year, both in size of the crowd and participation of Alachua businesses.

But like so many other things, the COVID pandemic limited the event in 2020. While it was still held, changes were made and events were moved to Skinner Park where the outdoor space allowed for social distancing. While Santa still greeted the crowd from his carriage and did the countdown to the tree lighting, there was no face-to-face meeting with the children, music was limited, and safety concerns even impacted the tradition of giving out candy, hot chocolate and cookies.

This year, the celebration is in overdrive. On Dec. 3, Main Street was decorated with brightly lit multi-colored lights and downtown businesses sponsored candy giveaways and children's activities. Santa and Mrs. Claus listened to children's Christmas wish lists as his elves helped direct the line so each child could meet Santa. The space was transformed into a magical spot covered in Christmas lights with cookies and gifts for the children. Musicians performed along the brightly lit street as families strolled along, peeking in shop windows after the official tree lighting at 6:30 p.m. The tree lighting, visit with Santa, and the parade has become a holiday tradition throughout the community.

It is a month-long celebration as Alachua is bringing back the magic of the holiday season. Under the guidance of CRA director Lindsey Rizzo, “Holiday Nights on Main Street” features a whole series of events to keep the Christmas spirit alive. The tree lighting in Skinner park was the kick off for the season. Called “Fa La La Fridays,” all three Fridays before Christmas will feature a series of events sponsored by the businesses on Main Street, the City of Alachua and corporate sponsors. “The events are the work and coordination of numerous volunteers and businesses, and we are grateful for all the work they put into this,” said Rizzo. “We wanted to make this a celebration of the whole holiday month with participation from the whole community, not just the singular events of the past.”

Some of the changes from last year remained, such as the tree lighting at Skinner Field. Santa arrived in his carriage and announced the tree lighting countdown, but this year the children could again sit on Santa's lap.

“We found that moving all the city events to one location last year made more sense and focused activities in the park. But we also got a lot of support from businesses and organizations on Main Street,” said Rizzo. Photos with Santa were provided by Magnolia Lane Photography and Alachua Boy Scout Troop 88 provided hot chocolate. Capitol City Bank provided popcorn and costumed characters in the park while the City provided cookies and a snow machine blowing out pretend flakes.

Along with decorative lights and Christmas trees, carriage rides on Main Street offered a nostalgic glimpse of times past The City also added a selfie photo opportunity in Santa's Sleigh. Kelly's Kreations set up a candle making workshop for kids and Alachua Flowers provided an ornament making class, while the office of Michael Turner, CPA offered free gift wrapping. The Alachua Woman's Club provided other activities for children. Springs Title set up a movie screening on a building wall. Other sponsors who provided materials or funding included Vystar, Fracture, Signarama and Dollar General. All these activities are part of the Fa La La Fridays and will continue for the next two Fridays.

Other events that are part of the month-long celebration include a performance of the Nutcracker at Legacy Park on Dec. 9 at 7 p.m. The Christmas Parade will be held on Main Street on Dec. 11, a children’s bash at the Woman's Club on Dec. 12, Pizza and Pajama events with Santa at My Pizza Place on Dec. 16 and 18 and the grand opening of Manor on Main on Dec. 21. More information on all events can be found at holidaynightsonmain.com.