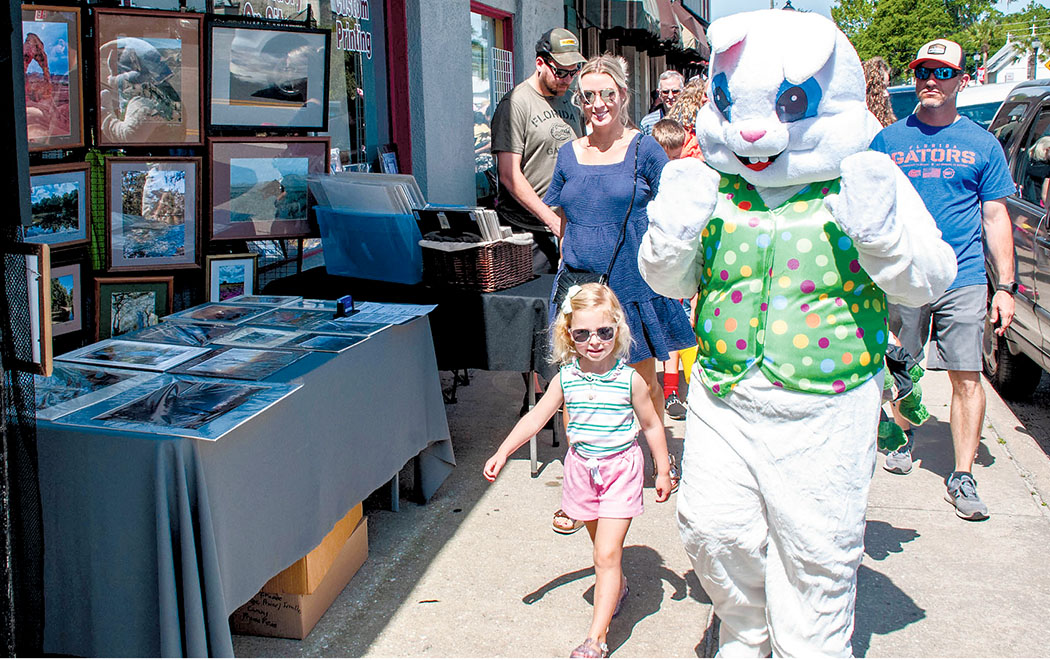 ALACHUA ‒ The Easter Bunny made appearances in both High Springs and Alachua over the weekend as children took to grassy fields to find colorful eggs on Saturday, April 16.

In Alachua, the City's Recreation and Culture Department hosted an Easter Egg hunt at the Legacy Park at 10 a.m. Over 220 families filled the Legacy Park Multipurpose Center to have a photo taken with the Easter Bunny and form lines to be taken to four different fields where the plastic eggs were hidden.

“We decided based on past experience to divide it by age groups so that the little kids could have their own area and not get overrun by older kids,” said the City’s Recreation Department Event Coordinator Kimberly Vermillion. “We wanted everyone to have an equal chance.” Groups were divided by age groups of 1-3; 4-6; 7-8 and 9 and up.

“We had over 1,400 eggs that the staff had put either a piece of individually wrapped candy or a ticket inside,” said Vermillion. There were 200 tickets, which entitled the lucky children who found those eggs to a large Easter basket or stuffed animal donated by Dollar General. Vermillion added that Pro Tae KwonDo also provided tickets in eggs as well.

While the planning stage and egg stuffing had taken the staff weeks to organize, the event was over in under 20 minutes after the kids were assembled and rushed out to the fields to pick up every egg.

“We were really pleased with how smoothly the event went and we received a lot of positive comments from the parents,” said Vermillion. “We weren't sure how many would attend due to COVID, which shut us down in 2019 and 2020, but the participation was bigger than expected and nothing was left over after the event.”

An hour later it was High Springs’ turn with an event organized by the Chamber of Commerce. The downtown area along Main Street had several activities going on the same day including the High Springs Art Walk and the first Easter parade and Easter egg hunt in more than 15 years.

Children brought their Easter baskets to go “trick or treating” as the downtown stores on Main Street handed out sweet treats. The chamber led groups of children from the chamber office, located at 23517 N.W. 185th Road, next to the Farmers Market Pavilion, over to the museum to meet the Easter Bunny and parade back through downtown to the chamber office for an Easter Egg hunt.

“We had to divide them into several groups for the parade due to the high turnout,” said Chamber President Sharon Decker. “We had tried to get an idea of how many were coming by asking for pre-registration so we would know how much eggs and candy to buy.” The chamber purchased over 1,000 eggs, the 1st Baptist Church donated stuffed animals and the pre-registration numbered 41 families.

But the event turned out to be even more popular and drew over 200 families. “This was a good start on what will be an annual event, but I think we might have to plan bigger next year,” said Decker. She added that next year the chamber is going to require pre-sign-up only so they can have a better idea of how much to buy and make sure that everyone, especially the younger kids, get plenty of candy or prizes.

“The businesses on Main Street were great at helping out and distributing their own treats as well” Decker said.” It was a great success and we look forward to making it an annual event.”