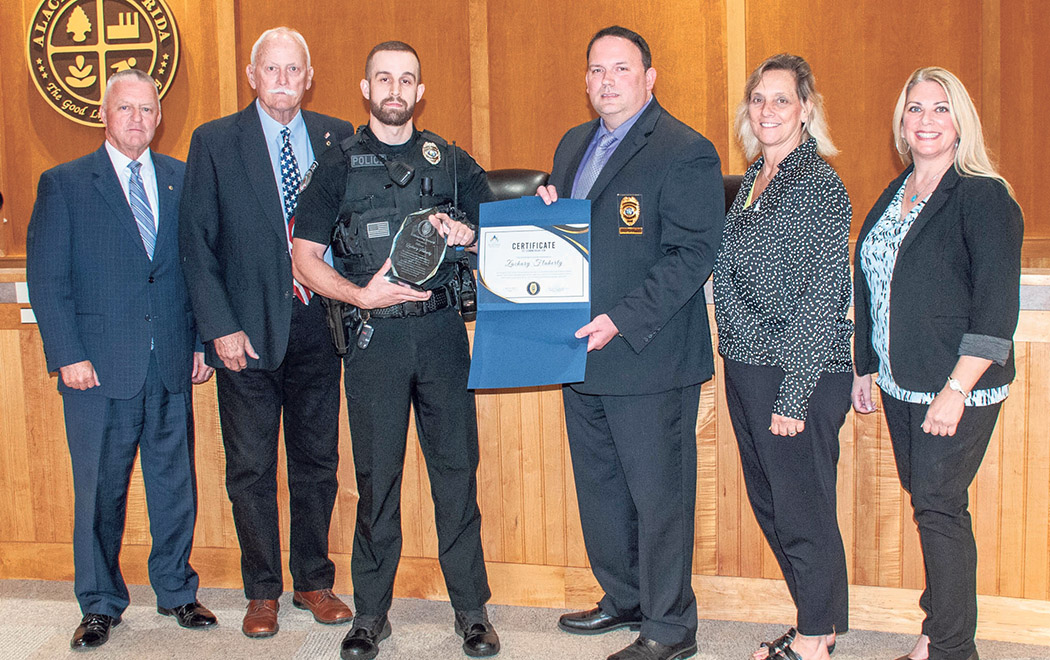 ALACHUA ‒ There is a new member of the City of Alachua Commission as Ed Potts was sworn in at the April 25 commission meeting. Interim City Manager Mike DaRoza administered the oath of office to both Potts and incumbent Mayor Gib Coerper, who ran unopposed in the April 12 election. Potts beat out opponent Gregory Pelham for seat 2 with 715 votes representing 53 percent of the 1,340 votes cast while Pelham received 625 votes representing 47 percent of the vote.

Commissioner Jennifer Blalock assumes the duties of Vice Mayor as the Commission voted unanimously to appoint her to position. Blalock joined the Commission in 2021 after winning seat 5 in a three-way race.

In other business, the Commission honored Alachua Police Department Officer Zachary Flaherty. On Feb. 25, Flaherty received a call of a medical emergency at the Alachua McDonalds Restaurant. Upon arrival, he found several people gathered around an unconscious man in the restroom. Flaherty recognized the symptoms of a drug overdose as he examined the unconscious man whose breathing was becoming labored and his lips were turning blue.

The man had ingested cocaine that had been laced with fentanyl, a Schedule II controlled substance similar to morphine but about 100 times more potent. Flaherty stabilized the man using Narcan, a prescription medicine used for the treatment of a known or suspected opioid overdose. By the time the EMT's arrived the man was beginning to respond and Flaherty was told that his actions saved the man's life.

The Commission presented Flaherty with an award as Alachua Police Department officers applauded from the commission chambers. Flaherty said that what he did was not heroism—he was simply doing his job as any police officer would have done.

The Commission turned their attention to petitions regarding development and land use. Clay Sweger, of EDA Consultants, Inc., agents for JTFA, LLC and Kevin & Shima Carter, property owners, requested amending the Future Land Use Map (FLUM) on a 162.5-acre property from Agriculture to Community Commercial for seven of the acres, a Low-Density Residential designation for 115.5 acres, and Moderate Density Residential for the remaining 40 acres.

The property is located south of the intersection of Northwest U.S. Highway 441 and Northwest 188th Street. The property is undeveloped and is primarily comprised of lands used as a tree farm and planted pine. Low density allows for one dwelling per acre or a potential of 115 new houses while moderate density allows for four dwelling per acre or 160 houses for a potential of 275 new houses along with 4,000-square feet for a neighborhood amenity center and commercial businesses along U.S. Highway 441 frontage.

The Commission approved the FLUM request as well as an accompanying rezoning request on first reading and will consider the matter again at a second and final reading to be scheduled.

The Commission also issued final rezoning approval to a planned development – residential (PD-R) for Fletcher Trace. Ryan Thompson, of CHW, Inc., petitioned on behalf of Waco Properties, Inc. for consideration of rezoning the property from Agricultural to PD-R. This project was previously known as Savannah Station Phase 3, but is now named Fletcher Trace.

The 118.2-acre property is located east of CR 235, north of Northwest 110th Avenue, and south of the Pilot Forest Subdivision. The PD-R zoning permits a maximum of 472 residential units on the property. The development will consist primarily of single family detached structures, but approximately 22.5 percent of the units could be developed as single family attached units, with up to eight units in a single building. The proposed development will be constructed in one or more phases.

The Alachua City Commission next meets on April 9.