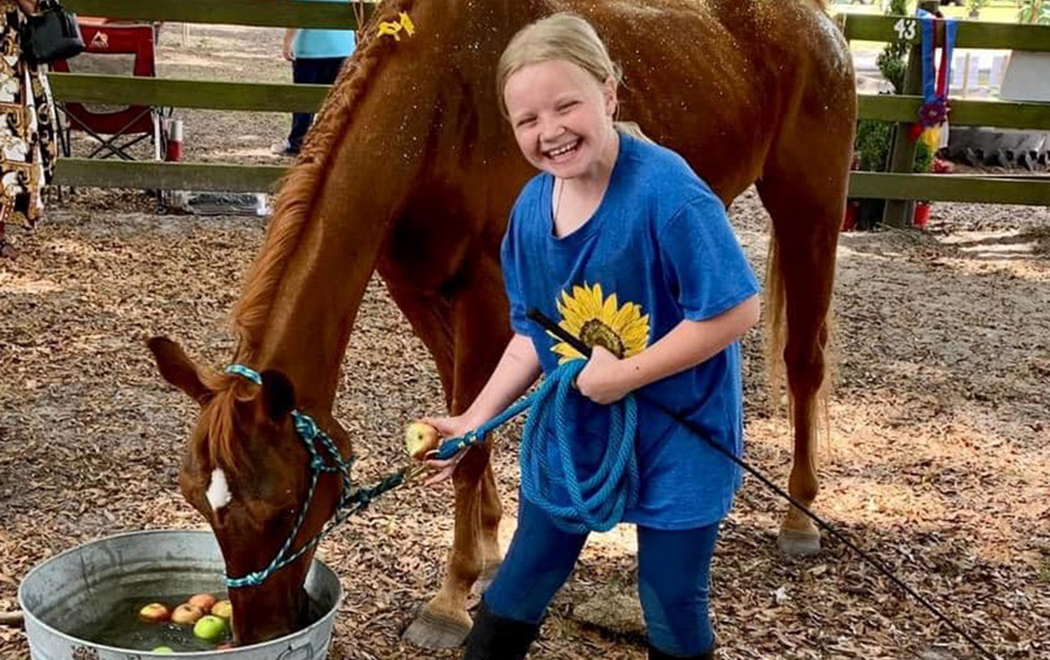 BELL ‒ Rescued horses, riders, family and friends came together on Saturday, April 30 for the first annual Horses Without Humans (HWH) Volunteer Rescue Makeover Challenge. The event was held at the Horses Without Humans facility at 6191 N. U.S. Highway 129 in Bell. Horses without Humans is a 501(c)(3) nonprofit equine adoption organization devoted to rehabilitating and retraining unwanted and at-risk equines with the goal of finding them suitable life-long adoptive homes.

More than a hundred members of the community joined the 17 competitors and 19 rescue horses competed in the event. Competitors were chosen from people who had volunteered 40 or more hours at Horses Without Humans. Participants had been training their assigned rescue horses since March 13, doing basic groundwork and introducing the obstacles, to see how much progress they could make.

Every participant in the horse-handling competition was required to maneuver a course that contained 26 obstacles of varying difficulty, including everyday items like a low bridge, water obstacle, mailbox, wind chimes, a jump, and a gate. More challenging obstacles include a teeter-totter, a high bridge, a ball that horses pushed down a chute, backing through poles, climbing up and over a set of three huge tires, doing turns on the hindquarters and forequarters, a slalom around cones, a figure eight around barrels, entering and backing out of a horse trailer, and side-passing over poles.

“Many of the rescue horses we receive have not been handled and are not well trained. The goal of the Makeover was to train the rescue horses, so they are prepared to go into any discipline,” said Yvonne Barteau, founder of Horses Without Humans. “It's all about educating people and developing relationships…building partnerships. Horses cannot become what we want by remaining what they are. Several of these horses needed to learn to trust and work with people, and to learn basic skills. Competitors worked hard on doing basic groundwork and then working on the obstacles. Both the volunteers and the horses showed their many skills and made us proud at the Makeover.”

Thirteen-year-old Chanel Bass and her horse Elsa were the Overall High Point Champions for the day, as well as winners of the Junior Advanced In-Hand class. Overall High Point Reserve Champion Eva Farrell and her rescue horse, Tilly, also won the Senior Advanced In-Hand class, as well as the Reserve Champion award for Best Turnout. The Champion award for Best Turnout was bestowed on “Trooper” Doug Brown, who was dressed as a U.S. Cavalryman in the Spanish-American War of 1898, complete with hat, boots, and bandolier. His rescue horse, Rusty, was adorned with equine garb of that same era.

Judges for the Makeover were Kassie Kuz and Jan Nierzwick, both seasoned dressage riders and competitors themselves. In scoring the competitors, they focused on the contestants’ abilities in several categories, including catching and haltering; groundwork; general interaction; timing of aids; forward motion; willingness to guide/steer; horse’s yields to pressure; handler and horse’s conduct, demeanor, and confidence; the competitor’s ability to build a solid foundation; and performance on the obstacle course.

Barteau encourages people who may be considering buying a horse to consider adopting, sponsoring, or fostering a horse in need. For more information about Horses Without Humans, visit the HWH website at www.horseswithouthumansrescue.org.