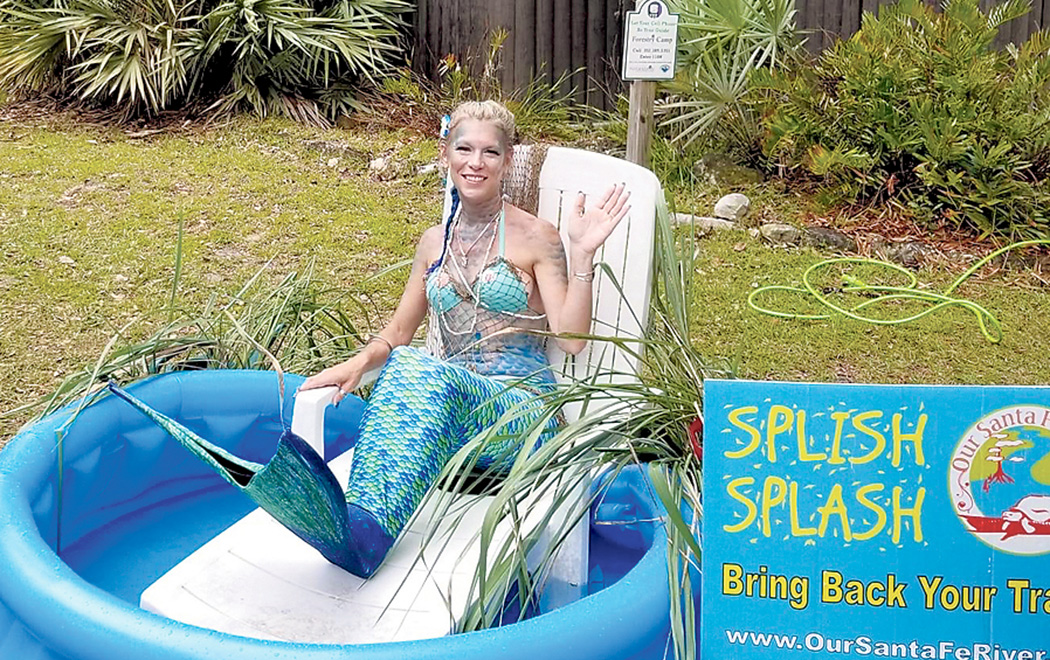 HIGH SPRINGS ‒ Local environmentalist Rhonda Long was killed in an accident in South Florida on June 19. Long was well known in the High Springs community and among environmental groups associated with the rivers that offer beauty, recreation and water from the aquafer. For Long, the rivers were her playground where she spent much of her time kayaking. And this love of the local environment and rivers led her to dedicate herself to preserving them.

She was the Stewardship Chair for the Our Santa Fe River (OSFR) organization, Director for the Riverfest Songwriters benefit and Founder of the Eelgrass Restoration Project. Long also taught classes at Fort White High School in Aquatic Horticulture. She was the co-founder of a suicide prevention organization that raised funds for preventing suicides and helping surviving family members cope with the loss.

The primary method of fund raising was a 96-mile river paddle each year, which she completed for the past four years. Long also worked at Rum 138 canoe outpost, giving tourists advice about the best parts of the rivers to visit. In addition, she also often portrayed a mermaid at various fundraising events for the rivers, earning her the nickname of “Mermaid Rhonda.”

Long’s passion for the environment was just part of how she gave back to others. She worked on various benefits, helped those who needed assistance medically or for transportation, including her parents, Donna and Joe Long, who she moved from Illinois due to multiple medical issues.

Friends recall that Long always projected a happy and warm personality, lighting up the room and had nothing but kind words for everyone. She was well known for all her charity work and popular figure in town with her ability to make those she was talking with the undivided focus of her attention.

Long had travelled to Coco Beach on June 19 to attend the wake of her friend, Randy Fortner, who had died suddenly from a brain aneurysm. Driving home to High Springs at 10 p.m. on a two-lane Highlands County road, the car in front of her stopped on the highway and attempted a U-turn, blocking both lanes. With no time to react, Long hit the car broadside. Killed in the accident was a 13-year-old girl in the other car and Long, who passed while being life flighted to a hospital.

Long’s friends were both shocked and devasted that someone so full of life, passion and kindness was suddenly gone. It was especially devasting for her elderly parents who were dependent on Long for everything, including her house, which still had a mortgage on it.

People wanted to honor her life and her dedication to both the environment and her friends and family. A Go Fund Me page was set up to raise funds for her family and her final expenses. It was also decided to hold a Celebration of Life with some of the many musicians she knew and enjoyed hearing.

The group of friends approached Baram Kim, owner of the Great Outdoors and Pink Flamingo restaurants in High Springs to inquire about using one of the venues for a concert. Kim, who was also a friend of Long, immediately offered the Pink Flamingo to hold the event.

On Saturday, July 30 there will be that memorial Celebration of Life fundraiser at the Pink Flamingo to raise funds for Long’s elderly parents who have multiple medical issues. Music will be provided by Thom Duncan, Mike Bouleware and In The Moment band, along with possible special appearances by other musicians who knew her. All are playing for free so all proceeds will go to her family. There will also be a 50-50 drawing, a silent auction featuring donated art and other objects from local artists and businesses, along with a raffle of smaller objects.

The event is open to everyone who would like to attend. All proceeds will go to Long’s family to either use for their expenses or give to her environmental organizations, if they choose. But just as important, the Celebration of Life will honor a woman who dedicated herself to others with a life well lived but cut short too soon.