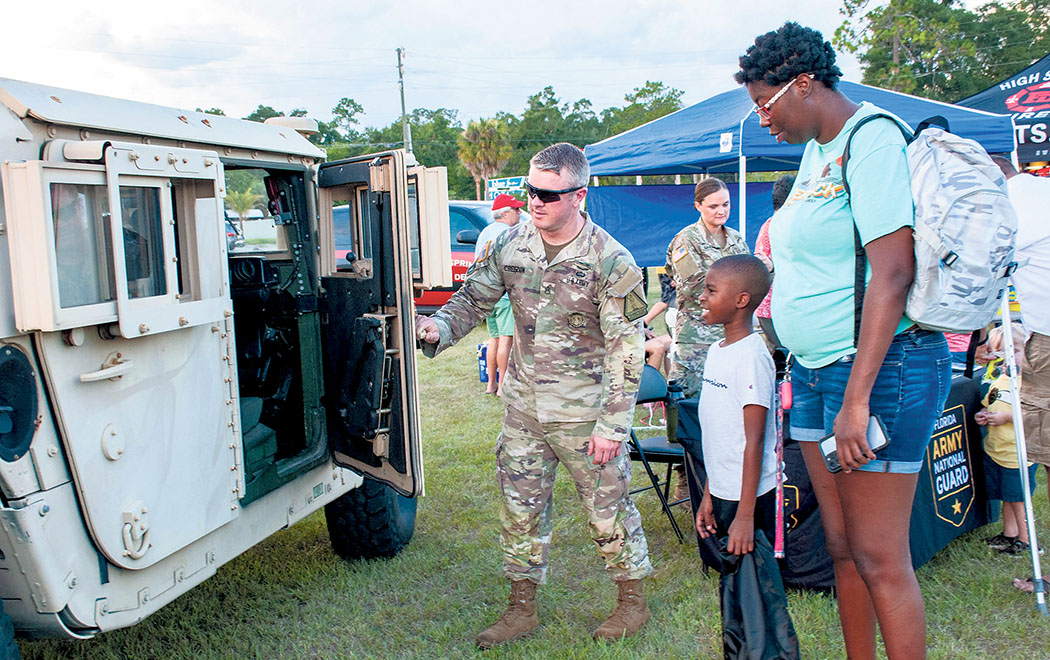 HIGH SPRINGS ‒ The city of High Springs came together with its police department, High Springs parks and recreation department and other city departments for a night of music, fun, and giveaways. For the past 39 years, on the first Tuesday in August, communities throughout America hold a National Night Out event. Over 38 million neighbors take part across 16,000 communities from all 50 states, U.S. territories and military bases worldwide. National Night Out gives residents an evening to meet neighbors, area first responders and other organizations that provide services to the community.

“We work very well together in the city with a lot of communication, especially as the school year approaches,” said the City’s Parks and Recreation Director Damon Messina. “We like to bring fun activities like this and our summer programs to our citizens, and we have good support and working relationship with many community groups.”

High Springs is one of 100 communities in Florida that sponsor a National Night Out event. Each year High Springs first responders and City staff host the event at the Civic Center field. A line of police and fire vehicles are parked with lights flashing for kids to explore along with games and prizes hosted by local civic organizations and churches.

“The goal is to get out there and interact with the community, show we are their neighbors whose kids attend the same school, we shop at the same stores and attend the same churches,” said High Springs Police Chief Antoine Sheppard. “We want to break down the walls that hinder communication. We want to empower the community with the ability for them help protect their community and to have a more confidence in working together with the police as a team. But we want it to be a fun event as well.”

This year, a long line of parents and students formed at the doors of the civic center for a back-to-school giveaway. Deeper Purpose Church, 1st Baptist Church, Lee's Pre School, Santa Fe Kiwanis club and the GFWC High Springs Womens Club spent months gathering new school supplies to distribute at the event to families. Everything was laid out in orderly rows as families collected needed supplies for the start of a new school year.

Outside, police and fire vehicles were parked with crews who were interacting with people and giving tours of their vehicles to curious children. A DJ played music for the crowd as people lined up for free hot dogs, pizza or burgers served by police and City staff

Various groups set up stations to give away small prizes or games for the kids. By far though, the favorite game was a dunking machine. People took turns testing their skills at tossing a baseball at a bullseye target to dunk a police officer in a water filled tank. Police officers took their dunking good naturedly, even encouraging children to hit the target with their fists to send the officer into the water accompanied by hilarious laughter and a resounding splash.

The High Springs Lions Club had their “train” on site offering free rides to children while the Florida National Guard gave tours of a Humvee. In the middle of the field was a small kiddie pool filled with water balloons, which quickly turned into a favorite spot for the kids, as they threw water balloons at each other and at several daring police officers who became involved.

The event brought residents out for a fun evening where they could meet their neighbors and meet with police officers and firefighters who protect the public. “We want to maintain a positive environment for our residents,” said Messina. “Let them know that the City of High Springs and first responders are there for them as part of the same community.”