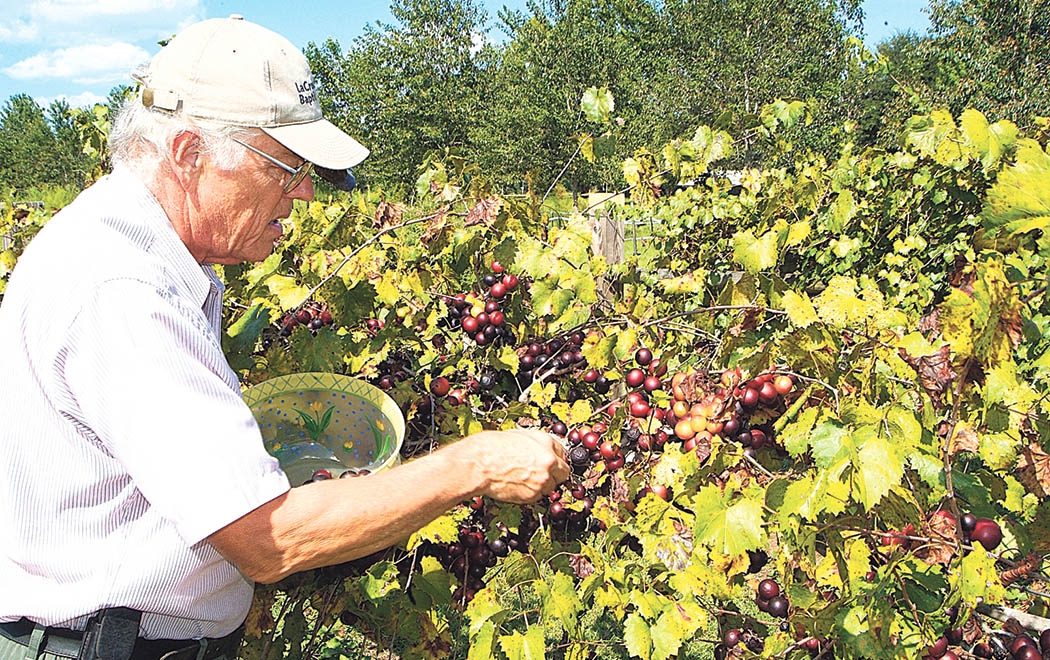 ALACHUA – It’s that time of year again when the dark purple and golden grapes of Florida are ripe for the picking, just in time to bring a refreshing quencher to the dog days of summer.  For a few short weeks each year, Florida’s native muscadine grapes adorn vines in the wild and in area farms and vineyards.

At the Loftus Family Farm in Alachua, the grape picking season officially opened a few weeks ago, but there are still some plump, juicy grapes waiting for the picking.  Other area u-pick grape operations are also underway as the fruits ripen.  Weather, as unpredictable as it is, has a significant impact on the health of grape vines and on how long it takes their fruit to ripen.

The last chance to pick grapes at the Loftus Family Farm will be this Saturday and Sunday, September 10th and 11th between the hours of 7 a.m. and 1 p.m.

Some years, scorching temperatures will accelerate the ripening process, and this year’s crop is no different says Don Loftus, a local farmer and viticulturist.  Don Loftus, along with his son, Curtis Loftus, run the vineyard which opens each year.

The Supreme variety of muscadine grapes seem to be great performers each year, according to Loftus.

Perhaps mastering the technique of cultivating the grapes is knowing when they’re just right for picking.

“The biggest problem is picking the Supremes too early,” Loftus explained.  As much as those plump purple grapes call out to be picked, they’re probably not ready yet.  “You want to wait until they’re really dark,” he said.

Unlike other fruits, muscadine grapes do not ripen significantly once picked.

Don Loftus got into the business of growing muscadine grapes more than 15 years ago when he started planning for his retirement.  Since retiring from the University of Florida, he has dedicated his time to the Loftus Family Farm, which includes the muscadine grape vineyard he has developed and grown from scratch.  Well into the throws of retirement, Loftus now realizes he left one full-time job for another, operating a vineyard and farm, which is why, in part, he has turned operations of running the business over to his son Curtis.

In 2004, Loftus first started converting the field that once grew persimmons, which were also negatively affected by North Florida’s winter weather patterns, into 1.5 acres of grapes.

The u-pick farm is one of a handful in the area and is open to the public.  The Loftus Family Farm specializes in the Ison and Supreme varieties of muscadine grapes, but is branching out into others as well.

Over the years, Loftus has added new varieties, such as the Delicious, a self-pollinating muscadine developed by the University of Florida.  He’s using the new varieties to replace others lost to natural causes and winter damage in prior years.  Each no variety requires a few years before the they are on a scale ready for picking, but this year.  Loftus compares the fruit to the Supremes, joking, “As their names suggests, they really are quite delicious and they have the same crunch and taste to them.”

The ‘Delicious’ variety is also disease resistant and is among the top yielding muscadines.

Loftus said his son may be addition additional crops and offerings to the farm to extend the season for which the farm is open to the public.  The Loftus family has their hands full meticulously attending to the 14 rows of grape vines, each several hundred feet long and none of which are sprayed with potentially dangerous chemicals and pesticides.

Indigenous to the southeast region of North America, muscadine grapes ripen in late summer.   Right about now is the last chance to pick grapes at the Loftus Family Farm where avid pickers are welcomed to their hands-on picking experience.

The vineyard has already become a popular spot among many people who are aware of the u-pick farm.  Loftus credits some of that success to the well-manicured rows of grapes and relaxing atmosphere at his family’s farm.  Loftus said many pickers like to eat the grapes as they are, some use them for producing wine and others for making jelly and sauces and freezing for later consumption. Florida’s $20 million-a-year grape industry is typically the second- or third-largest market for table grapes and wine in the country.

The address for the vineyard is 15585 NW 29 Street, Gainesville.  East of Alachua on NW 156th Avenue, the farm is at the midway point between State Road 121 and County Road 231.

Additional photos, health benefits, directions to the vineyard and uses for muscadine grapes and other information are available at LoftusFamilyFarm.com