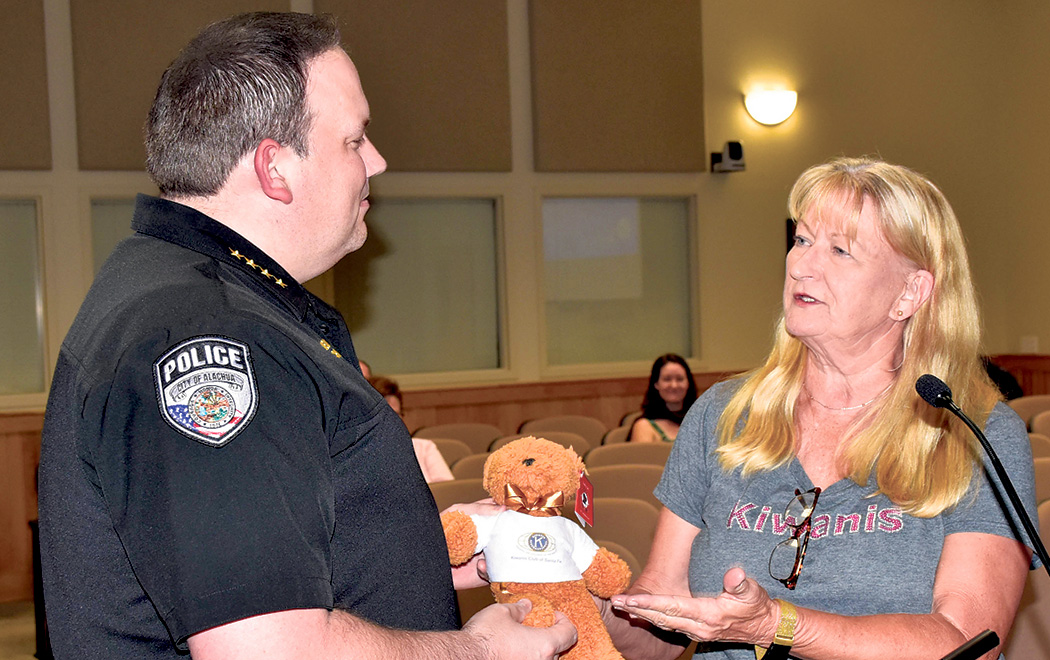 ALACHUA ‒ The Alachua City Commission on Sept. 26 approved the Preliminary Plat and Final PD Plan for Fletcher Trace that will allow for 472 housing units. The property is located east of CR 235, south of Pilot Forest and north of Northwest 110th Avenue. The proposed development consists of the subdivision of a ±118.2-acre property into 472 lots, with associated common areas and right-of-way.

The development as proposed will include 128 single-family attached units and 344 single family detached units. Approval was conditioned upon a 100 percent gopher tortoise survey for the property, which must be submitted with any application for a final plat and to utilize standard measures for protection for the Eastern Indigo Snake.

During the construction plan approval process associated with Phases 8, 9, and 10, a geotechnical engineer is to review any geological features identified in the geotechnical report and provide recommendations on whether or not remedial actions are required.

The Planned Development – Residential zoning designation for the property was approved by the City Commission on April 25, 2022 through Ordinance 22-10. At the Sept. 13, 2022 Planning and Zoning Board hearing, the Board voted 3-0 in favor of forwarding the application to the City Commission with a recommendation to approve.

In other business, the Kiwanis Club of Santa Fe gifted teddy bears to the Alachua Police Department. Kiwanis Club president Sue Weller and Kiwanis secretary Tom Weller presented 55 teddy bears to Alachua Police Chief Jesse Sandusky. The Kiwanis Club collected teddy bears to donate to both the High Springs and Alachua police departments so that officers can carry them in their patrol cars to help calm children they encounter in traumatic or stressful situations. A teddy bear can make a difference in the life of a child who has experienced trauma at crime scenes, accidents, domestic violence calls and other incidents. Thanking the Kiwanis Club, Chief Sandusky said the teddy bears are valuable for both police officers and children in stressful situations, providing emotional comfort to a child and helping officers work through other aspects of the crisis.

The City of Alachua is playing a visible role this year in the fight against breast cancer. About 42,000 women and 500 men in the U.S. die each year from breast cancer, and October is recognized every year as National Breast Cancer Awareness month. In support of the ongoing battle against breast cancer, the City of Alachua has launched its “Alachua Goes Pink!” campaign. Pink ribbons are displayed on the City’s fleet vehicles, the Alachua Police Department decals one of its traffic units and staff members wear commemorative bracelets and pins in an effort to raise awareness about the disease.

The Commission proclaimed September as American Pharmacist Month with a proclamation recognizing that pharmacists are important members of a health care team as they are well versed in medications, the effects they produce in the body, and how medications interact or interfere with each other. In addition to safely providing medicine, pharmacists offer many other services as part of their commitment to helping patients live healthier lives. Local pharmacist Dr. William Garst received the proclamation presented by the Commission.

The Commission filled two openings on the Senior Resource Advisory Board (SRAB). James (Jim) Curington and Karen Reed were each appointed to a three-year term. The SRAB is a five-member board that meets quarterly serving in an advisory role to the City Commission by providing information on issues of importance to senior citizens in the community.

In other business, the commission approved on first reading a request to amend the City of Alachua Land Development Regulations (LDRs) to allow self-service storage units as a permitted use in the Light and Warehouse Industrial (ILW) zoning district. On Sept. 13, 2022, the Planning & Zoning Board held a public hearing and voted 3-0 to send the request to the City Commission with a recommendation to approve. The City Commission is expected to consider this action on second and final reading at the Oct. 10, 2022 Commission meeting.

The Commission also approved on second and final reading a Large-Scale Comprehensive Plan Amendment (LSCPA) for a proposed development along Peggy Road. The action on the 51.7-acre property changes the zoning and land use to Planned Development, Moderate Density Residential, which would permit up to four units per acre allowing for 206 total units. The property is located south of Peggy Road and Legacy Park, north of CSX rail right-of-way, east of Interstate – 75.

In other City business, the Commission approved ratification of the 2022-23 – 2024-25 Alachua Police Department Collective Bargaining Agreement. The new agreement for take home vehicles by sworn officers permits use within or outside Alachua County but now restricts distance to 20 driving miles from the APD facility at 15000 N.W. 142nd Terrace. Historically, take home vehicle use has been restricted to Alachua County.