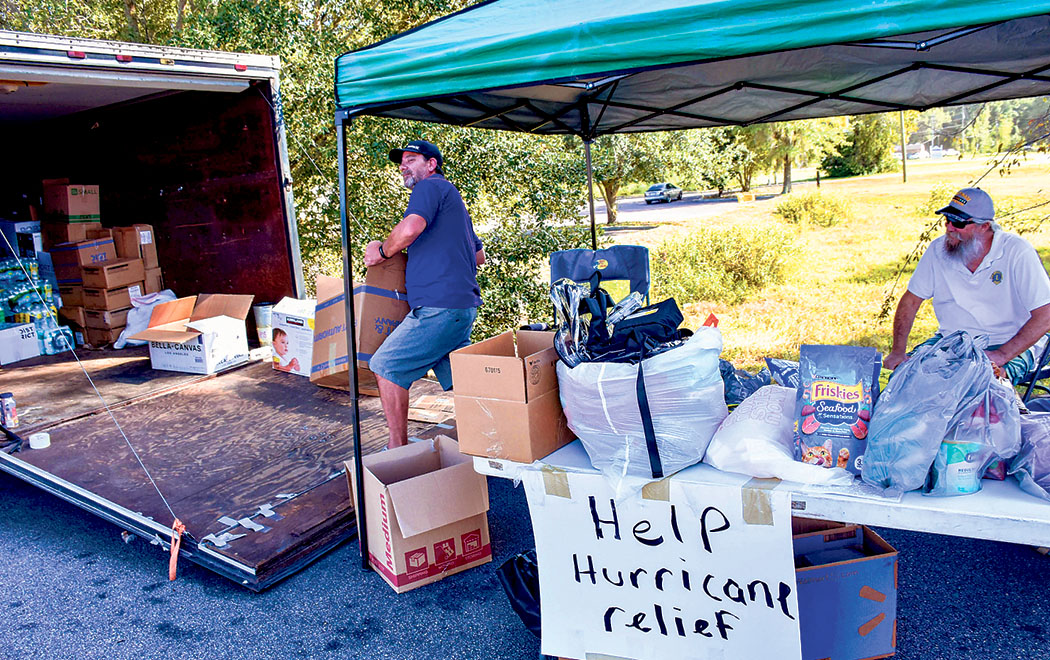 HIGH SPRINGS ‒ The High Springs Lions Club has a long history of helping others in need, especially during times of crisis. And this time, in the wake of Hurricane Ian, there is a personal connection as well.

On the early evening of Sept. 28, 2022 southwest Florida was decimated by Category 4 Hurricane Ian. With sustained winds up to 155 mph the storm made landfall near Fort Myers with storm surges of 12 to 18 feet creating a wall of water that that obliterated everything in its path. It also brought massive amounts of rain as it barreled across the state, exiting on the Atlantic side of Florida to continue up the coast creating more damage along the coastal areas of Georgia and the Carolinas. In the interior of Florida, rainfall across the state was staggering. In just 24 hours, automated rain gauges reported as much as 31.52 inches of rain near the Ponce Inlet community on Florida’s east coast, causing massive flooding.

A deadly combination of storm surge, rainfall and high winds left 2.6 million people without power in the state. The hardest hit areas have been described as resembling “a war zone” with destroyed and flattened buildings, cars and boats tossed from their original locations. Florida faces the grim reality that Hurricane Ian is the deadliest storm in the state since 1935 and ties for the fourth-highest landfall speed on record in Florida.

Ian’s death toll has climbed above 100 as rescue crews go door-to-door to search for survivors and help in recovery. Federal and state relief efforts are moving forward and power has been restored to all but 440,000 customers in Florida, but it will be months and possibly years before these victims can rebuild their lives. Federal and state sources can help rebuild infrastructure, but for many people, simple daily items are not available.

The hardest hit areas were the barrier islands, like Captiva, Sanibel and Pine Island, where the storm surge washed over the islands leaving little standing and destroying bridges that linked them to the mainland. People who did not evacuate were stranded without food, water, power or communications. The only access is by helicopter or boat until the bridges are rebuilt.

Lions Club member Justin Young's mother-in-law, Kimberly Teasdale, lived on Pine Island. Young desperately tried to locate her, hoping for the best. Teasdale was found, but she was stranded on the island along with others. Understanding the dire straits these individuals were in, the Lions Club sprang into action, seeking donations to help those in the area who lost everything. They approached the local Winn Dixie asking to use their parking lot as a central location for community donations. The store agreed and made food donations as well as offering discounted prices for supplies purchased with monetary donations.

Currently, the hurricane victims need food, clothing and hygiene items rather than small sums of money. For days Lions Club members have been loading donations on a large trailer to take south, and with the community’s help, the trailer is almost full. This week their first trip is scheduled to drop supplies in Fort Meyers to be taken by boat to the barrier islands.

“On this initial trip we are concentrating on daily essentials like food, hygiene and toiletry items, medical items and baby needs,” said Lion member Mark Moomaw. “These are people who have lost everything but the clothes on their backs.” Moomaw added that while the government focus is on the major things like rescues and rebuilding, just getting their daily needs met is vital for these people.

“It’s often the small things that people don't think of like pet food or can openers to go with canned food donations. We are using any cash donations to buy the items donators don’t think of,” said Moomaw. “We will continue the efforts and expand it for clothing and other items that aren’t immediately vital, but this trip will be about getting them food, water and daily items.

Moomaw says the Lions Club will continue to make these trips as long as people will donate to help those affected by the hurricane. “The needs are massive, but we are going to do our part to help,” Moomaw said.

Anyone interested in donating to help the victims can drop off donation at any time at the Lions Club located at 26900 W. U.S. Highway 27 in High Springs or call 386-454-4521 for more information.