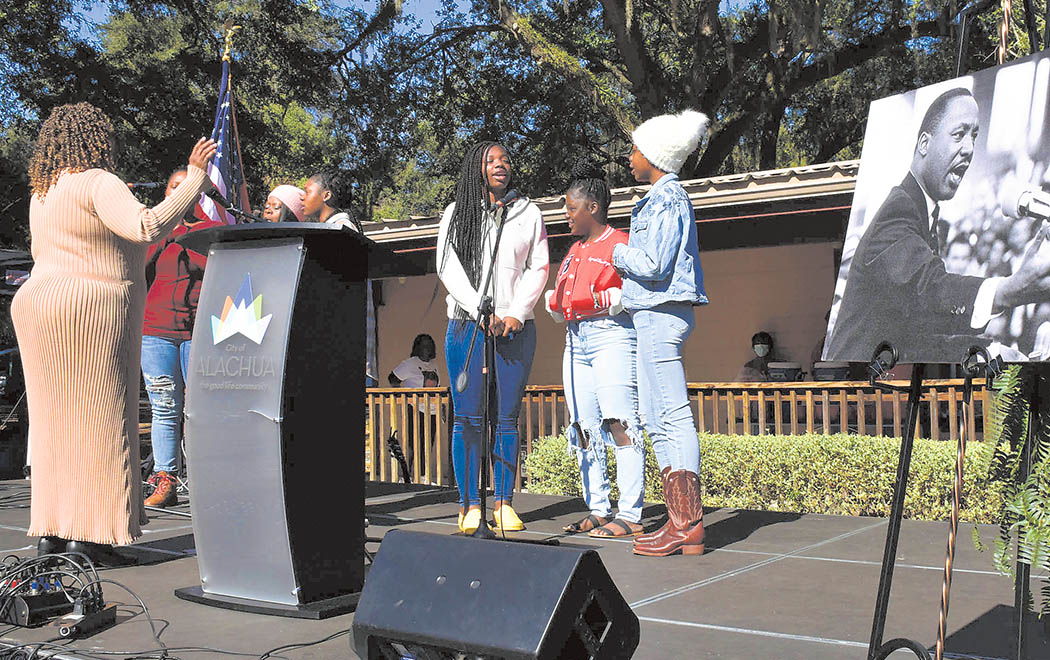 ALACHUA ‒ Almost every community in America honors the memory of Martin Luther King, Jr. King inspired millions of people in his lifetime, and he changed the face of American society by bringing awareness about equal rights. During the 1950s and 1960s he rose to national prominence, and his death on April 4, 1968 at the hands of an assassin shocked and angered the nation. But his legacy and accomplishments live on.

On Dec. 1, 1955, in Montgomery, Ala., Rosa Parks refused a bus driver’s demand that she give up her seat to a white male passenger, after the whites-only section was filled. This act of civil disobedience was done with quiet dignity rather than aggression or violence. King, who was a Baptist minister, used the incident to lead a black bus boycott which first brought him to national prominence. King was one of many people who became involved in the Civil Rights movement, but his speaking ability and organization of non-violent protests, large marches and economic boycotts made him the most visible leader of the movement. He helped organize the 1963 March on Washington where he delivered his famous “I Have a Dream” speech to a crowd of over 250,000 people. On Oct. 14, 1964, King was awarded the Nobel Peace Prize for his efforts to fight racial inequality through nonviolent protests. King was posthumously awarded the Presidential Medal of Freedom and the Congressional Gold Medal.

While each community may conduct its memorial celebration differently, all honor King’s use of nonviolent protest and his work toward unifying all Americans regardless of color, religion or gender. In High Springs, for the last 11 years there has been a memorial march down U.S. Highway 27 from City Hall to Catherine Taylor Park. This year, participants of all races gathered at the City government building at 11 a.m. The High Springs Police Department (HSPD) provided police car escorts to stop traffic and provide safety for the marchers. City officials and staff also joined the march with Mayor Gloria James leading the procession in a HSPD ATV while Police Chief Antione Sheppard led the walkers. Starting with a prayer, the march began at 11:30, walking down the sidewalk to Catherine Taylor Park.

For the past 17 years the City of Alachua has hosted a celebration of Martin Luther King Day with an event at the Cleather Hathcock Sr. Community Center. The City provides a catered lunch, equipment, law enforcement and some of the entertainment for the event. City employees from the parks and recreation department and the city manager's office volunteer their time and services for the event. Volunteers from churches and community organizations also offer their time to serve the food, prepare desserts and provide entertainment and information.

Pastor Natron Curtis, who is the chaplain with the Alachua County Sherriff’s Office (ASO ), was the Master of Ceremonies The opening prayer was offered by former City of Alachua Police Chief and current ASO Colonel Chad Scott. City Manager Mike DaRoza gave a short speech to welcome the crowd followed by the National Anthem sung by Amaris Walton. Additional entertainment included dancing by the Black Girls Club and music by The Neighborhood Kids and the Old Town COGIC Choir. Pastor Curtis delivered an impassioned speech about King and the importance of God in everyone's life. Afterword, lunch and deserts were served by the Mebane Alumni Association to the approximately 100 people who attended the event.

Events held throughout the country not only honor King and his legacy, but they also memorialize the changes in society that King helped bring about and serve as a reminder that there is still more work to do to bring equality to all Americans.