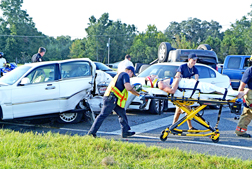 A four-car pileup on U.S. Highway 441 Sunday afternoon sent two people to the hospital, including 21-year-old Fernando Carlo who was transported via helicopter.

A Sunday evening accident sent at least two people to the hospital, one via helicopter.

The accident occurred at the intersection of U.S. Highway 441 and County Road 235A around 5:37 p.m. Sunday.

A black Saturn sports utility vehicle (SUV) being driven by 21-year-old Fernando Carlo was traveling in the southbound lane of U.S. 441 at speeds estimated to be well above the limit of 45 miles per hour.  Carlo may have been traveling at speeds closer to 60 or more m.p.h., police said.

The accident was caught on the dash camera of an Alachua County Sheriff’s Office deputy who was parked along the roadside.

Police say video footage shows that brakes were never applied before the Saturn struck the rear end of a Lincoln Town Car being driven by John Brown.  Brown was stopped at a red light, a police report indicates.

Brown’s Lincoln was then forced into a white BMW, which subsequently struck a silver Hyundai.

The Saturn SUV being driven by Carlo flipped and came to rest on its roof.

Carlo was transported to an area hospital via ShandsCare helicopter.

Brown was also taken to an area hospital, and later released.

Police aren’t sure how many people were transported for medical treatment as they described the scene as chaotic.  They are awaiting additional information from fire rescue services who triaged the injured and transported them.

Carlo and the other five passengers of the SUV appeared to have been returning from area springs.

Blood was drawn from Carlo to determine the possible presence of any intoxicating substances, and authorities are awaiting toxicology reports, which can take weeks to months.

Both the Lincoln and the Saturn SUV were total losses, sustaining substantial damage.