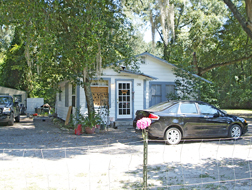 A family dispute, believed to be over a pickup truck, left a woman and her son dead Sunday afternoon, shaking the High Springs community.  The alleged shooter, a family member, was arrested a short time later.

Russell Dewayne Hogg, 58, has been arrested in the shooting death of his wife, Trenda Hogg, 48 and their 22 year old son, Anthony Wayne Hogg.

According to an arrest report, just before 1 p.m. Sunday, Russell Hogg, last known to be employed as a welder, pulled into the driveway of the family home at 240 Poe Springs Road in High Springs.  He allegedly exited his vehicle, pulling out an AK-47 rifle and pointed it at his son stating, “I told you I was going to kill you,” to which Anthony Hogg replied, “shoot me then.”

Russell Hogg reportedly fired two rounds at his son, striking him in the torso.  The report states, “[Russell Hogg] then walked up to him and shot one round to his face.”

Upon realizing Anthony Hogg had been shot, Trenda Hogg ran outside where “Russell [Hogg] pointed the gun at her and fired several rounds at her,” the arrest record states.

Russell Hogg then threw the gun down and an eyewitness grabbed the gun and threw it under the house to prevent further access to it.  Russell Hogg then got into his car and left, officials report.

When deputies arrived at the scene, both victims were lying in the front yard and pronounced dead, according to Alachua County Sheriff’s Office (ACSO) Spokesman Sergeant Todd Kelly.  He said there are some reports that Russell Hogg may have stopped in the Winn Dixie shopping plaza after the shooting.  Kelly was uncertain as to whether or not Russell Hogg had been residing at the family’s residence.

Two witnesses told investigators that Hogg stated his intentions to commit the crime beforehand.  “Russell was at their home and made the statement he “was going over to kill them.”  After the shooting, Russell Hogg allegedly returned to the witnesses’ home where he stated, “I told you I was gonna’ kill them,” the report states.

After being read his Miranda rights, Russell Hogg made several statements acknowledging that he killed his wife and son, according to ACSO Detective Sandra Myers.

Among his statements to investigators was that, “Tony [Anthony Russell] had gotten too big for his britches,” and that if he could have whipped his son, he would have, “rather than having to kill him.”

Myers wrote, “Russell [Hogg] also stated that it hurt him to see his wife laying there barely breathing because he did not want her to die.”

“I just killed my family and the bread winner of the home,” Russell Hogg allegedly said.

Kelly did not know if Russell Hogg was intoxicated in any way.

Russell Hogg was transferred to the ACSO Department of the Jail Monday.  Tuesday morning, he made a first appearance, Kelly said.

Russell Hogg is being held without bail on two charges of premeditated capital murder.

State Attorney Bill Cervone said the case will be presented to a grand jury within 21 days.  Grand jury presentations are required in first degree murder cases.