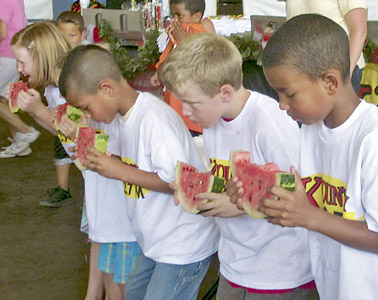 NEWBERRY – The Newberry Watermelon Festival Committee has packed a whole lot into their upcoming festival. Businesses, clubs, organizations and churches have pooled their resources to help celebrate a multi-faceted 24 hours of entertainment, contests, auctions and music on May 20-21.

This year's festival will begin with the Watermelon Festival Queen Pageant, 7 p.m., Friday, May 20. The pageant will be held on the Destiny Church Property, 20820 West Newberry Road. That location will also be the headquarters for most of the May 21 fun, games, contests and music.

Other festival-related activities begin at 8:30 a.m., Saturday, May 21, with the Watermelon Fun Run and Walk, which will take place at the Lois Forte Park (previously known as Triangle Park) located at 255 NW 260th Street.

The Newberry Watermelon Festival Parade will begin at 9 a.m., Saturday. Parade line up will begin at 8:15 a.m. at the Fire Station and will exit onto Newberry Road. The Grand Marshall this year is Alachua County Sheriff Sadie Darnell and the Honorary Grand Marshall is Riley Maddison. TheWatermelon Festival Queen and her court will be among those featured in this year's parade, along with several other local and regional dignitaries.

“Lewis and Mark have been practicing all year for this fabulous event,” said Thomas, tongue in cheek.

“One of the businesses contributing to the Newberry community this year is Santa Fe Ford,” said Woodcock. “They are sponsoring a 'Sign and Drive' event on May 21.” They will donate money to Newberry High School for each car that is driven the day of the festival.

“Here's your chance to try out a new Ford and help Newberry's students, too,” said Woodcock.

“T-shirt sales have been outstanding this year,” said Thomas. “We have had to reorder already and we haven't even gotten to the Festival itself,” she said. The shirts are for sale at Capital City Bank, 24202 West Newberry Road, Suite F and will be for sale at the festival. Cost is $10, $12 for size XX and above.

The day's event would not be complete without free watermelon slices, which are being provided by Bass Farm and Hodge Farm, both of which are located in Newberry.

The Newberry Watermelon Festival Committee says, “Ya'll come and join us for a fun-filled Newberry event.”