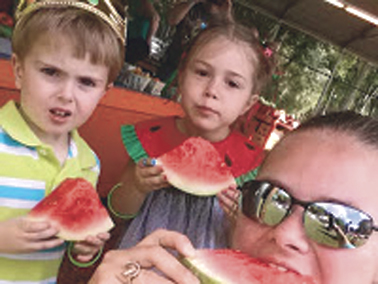 The parade began at 9 a.m., headed up by the Color Guard and the Alachua County Sheriff’s Office (ACSO) Motorcycle Brigade. Next came the Honorary Grand Marshall Riley Maddison. Queens of all kinds, floats, Shriners, tractors, trucks and Grand Marshall ACSO Sheriff Sadie Darnell were on hand as well. School Board representative April Griffin rode the antique fire engine and candidates for upcoming elections were there to meet the public and participate in the excitement.

At the festival itself, K-Country's Lewis Stokes and singer/entertainer Mark Copeland emceed the afternoon program. Newberry Mayor Bill Conrad formally opened the festival as he spit the first watermelon seed of the day. Free slices of watermelon, an auction, dunking booth, seed spitting and watermelon rolling contests were all part of the fun. Food and craft vendors had a myriad of items for sale to quench appetites for food and shopping. Music and fun were the highlight of the day.

The Festival Committee works hard all year in order to keep this tradition alive. Since the beginning it has been organized and run by local individuals who donate many hours to keep this community event active.

The City of Newberry, city commissioners, churches, businesses and the Alachua County Sheriff's Office and others are an integral part of the event.

The original festival began decades ago as a welcome home for returning soldiers after WW II. At first it was just a barbecue, free melons, cake walks, and bingo with the queen contest. At night a band played and friends square danced inside the old skating rink. It is a tradition that has been ongoing ever since.