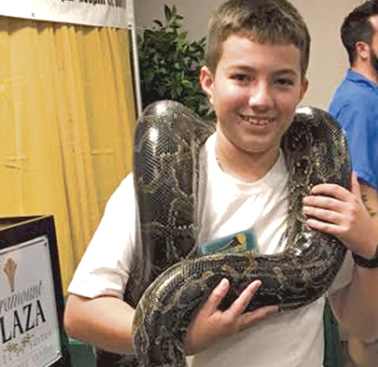 ALACHUA – One local teen is single-handedly running his own online reptile business.

Currently, he owns more than 70 reptiles, including ball pythons, kingsnakes, hognose snakes and bearded dragons from parts of the world like California, Africa and Mexico. All the snakes are non-venomous, his mother, Sarah Beavers, said.

Mrs. Beavers said her son’s love for reptiles began when he was about 9 or 10.

He got his first leopard gecko when he was in the third grade. Then, he got straight A’s in fifth grade and his parents rewarded him with his first ball python.

In addition to running his business, Beavers continues to make straight A’s in advanced classes at SFHS, actively participates in the school’s FFA program and works part-time at a local landscape company.

Despite the fact that this venture is a business, Beavers said he does it out of pure love for the animals.

“It’s a good bonus, but it’s more of – it’s just fun to work with them and be that weird person that people think of when they hear the word ‘snake’ or ‘lizard,’” he said.

Beavers said he’s learned that running his own business takes lots of patience.

“You’re going to have to put in money in order to make money,” he said. “And this is a hard business to make money in. If it’s something you love, don’t do it for the money, just do it because you love it.”

Admittedly a big spender himself, he said he’s learned that, in order for a business to be successful, the money that is made needs to go right back into it.

“You can’t get the money and use it for yourself,” he said. “It’s going to fail if you don’t put your money back into it, which also ties into the ‘you may not make a lot of money’ [idea].”

He said they buy most of the reptiles from display shows like Repticon or private breeders.

Repticon Reptile and Exotic Animal Conventions is the national leader in producing reptile and exotic pet shows throughout the country, according to the convention’s official website.

“A Repticon show would be like going to a car show,” he said. “You’ve got the various vendors showcasing what they sell and breed.”

He cares for them as if they were his pets – taking measures to make sure they’re healthy before being sold to their new owners.

This process, which includes feeding the reptiles properly, takes about three weeks for the snakes, while lizards take six weeks, but there is no standard – the amount of time is just his personal preference, he said.

All of the snakes are carnivores, while bearded dragons and crested geckos eat both insects and plants.

Mrs. Beavers, who holds a Class III license from the Florida Fish and Wildlife Conservation Commission, is interested in helping take care of the lizards, while her son focuses on the snakes.

Surprisingly, Alachua County has a high concentration of reptile breeders, Mrs. Beavers said. They’ve worked with local businesses like The Hogtown Reptile Shop and the Rowdy Reptile Shop, as well as private breeders in the area.

She said they also rely on a veterinarian at Hilltop Animal Hospital in Alachua, who has some experience with exotic animals, while referencing books and online resources when they have a question about an animal’s condition.

Specialists at the teaching hospital at the UF Veterinary School have also been great, she said.

While he understands not everyone will view reptiles with the same level of ease that he does, Beavers said it would be advantageous for community members to be more educated.

He said that his parents have given him a lot of support throughout this endeavor, and it also helps that they are not scared of the animals.

“I think it’s amazing that they’re not scared of them,” he said. “And they will support me with the ability to do these things that I like.”