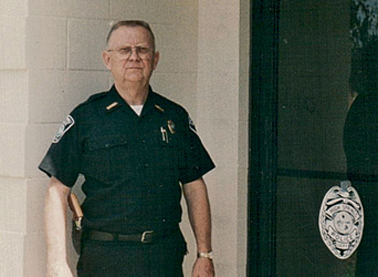 HIGH SPRINGS – Thomas W. Wolfe, one of the longest serving police chiefs in High Springs' history, died Saturday at the age of 89 under Hospice care following a six-year battle with a long-term illness.

City Clerk Jenny Parham said when Wolfe retired, he still acted like he was 23 instead of 76. “He had a lot of energy,” she said.

During the early part of the City's history, the Police Department and City Hall were housed in the same building. Parham remembers him as an up-beat, optimistic person who was always in a good mood. “He always had a story or two to share, and his presence was the highlight of the day for us,” she said. “The police department was just across the hall at that time and we dispatched for them during the day until the night-time dispatcher came in at 4 p.m.”

Wolfe presented a clean-cut, military-like appearance. A short crew cut and uniform were his standard attire. The city's current police chief, Joel DeCoursey, Jr., said he ran into him recently and he was as sharp as ever.

“Chief DeCoursey always came over to say ‘Hi’ to us whenever we would run into him in town,” said Wolfe's wife of 48 years, Myrna.

Wolfe was responsible for hiring Lt. Antoine Sheppard on April 26, 2001. “I was the first African-American officer hired in at least two or three decades,” said Sheppard, who also is the last remaining full-time officer hired by Wolfe. Sheppard described Wolfe as humble and a great police chief. “The City's flags are at half staff and we are wearing our morning bands in honor of Chief Wolfe,” he said.

“When we came back to High Springs after my husband died, Lt. Sheppard stopped by to express the whole department's condolences,” said Wolfe's wife. “I don't know how he found out, but he was there.”

Former City Manager Leonard E. Withey, Jr. said he saw Wolfe a little over a week prior to his death. “He told me at that time that his life was coming to an end,” said Withey, a long-time friend. “We talked very little about his illness during our two-hour visit, but much more about the old days and laughed about some of the things that had happened on our watch. Tom and I worked together for 20 years. He was chief when I was hired on Jan. 1, 1980. I always told him I will be retired and gone and you will still be here...and he was.”

Wolfe was a pilot in World War II, flying planes in the Pacific as he transported troops and goods throughout the war. “He landed at an airstrip that had been taken by the Japanese, which at the time was unknown to the Americans, and was held as a prisoner of war for two years along with his crew,” Myrna said.

“He somehow got in with the Chinese underground and he and his crew eventually escaped,” she said. “He had been reported as dead after all that time and scared his mother near to death when he walked into the house after being released from service.”

In addition to World War II, his wife said he was also drafted into the service again to fight in the Korean War.

At some point after his service, Wolfe went to work as an air traffic controller at Washington National Airport, retiring in 1965, said Withey.

Wolfe became a member of the High Springs Police Department sort of “through the back door,” according to Withey. “In 1965, one of our three officers, Mr. Nettles, was out sick,” he said. “Wolfe went to the police station and offered to work the night shift so the two remaining officers could work days. He said he would quit the minute Nettles was back at work. We took him up on it, and Mr. Nettles never returned to work, so Wolfe stayed on."

Withey pointed out that Wolfe and his officers cleared 50-70 percent of their cases. “The Florida Department of Law Enforcement came a couple of times a year to make sure everything was properly documented and on track,” said Withey. “They never found anything wrong with his record keeping.”

His wife described Wolfe as strictly a family man. “He cared about his children and grandchildren and enjoyed them tremendously,” she said.

Wolfe requested no funeral when he died. The family and the City of High Springs are honoring his request.