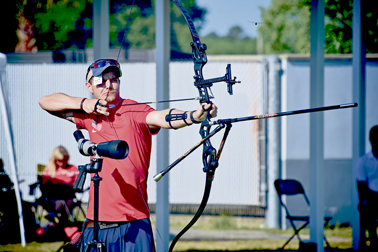 Jake Kaminski, 27, first became interested in archery at age 5. He was on the U.S. team that took the silver at the 2012 Summer Olympics in London.

NEWBERRY – Khatuna Lorig raises her bow to her cheek, and she is a woman on a mission.

Her gaze fixed on the yellow bullseye dozens of feet away, a silence that is tense with anticipation falls on her and her spectators as she pulls the arrow back.

While the other archers around her are doing the same, she is only focused on the target – her unspoken competitor.

After its airborne journey, the razor-sharp edge wedges its way dead into the center of the circle – a small victory the five-time Olympian is used to.

Lorig was one of the 16 archers who participated in the final nomination shoot for the U.S. Olympic team trials at the Easton Sports Complex in Newberry from May 26 to 30.

The event served as one of the final qualifiers for the U.S. team in preparation for the games in Rio de Janeiro, which will take place in August.

The archers began accumulating points last September, when over 400 archers competed in the first stage of trials said Sarah Bernstein, the media and public relations specialist for the USA Archery team.

After that, the number came down to just 16 – eight men and eight women – who competed last month at the U.S. Olympic Training Center in Chula Vista, California.

“And now those archers are here competing today for the official Olympic team,” she said.

Brady Ellison and Jake Kaminski, who were on the U.S. team that took the silver at the 2012 Summer Olympics in London, as well as Olympic newcomer Zach Garrett, secured the places on the team for the men’s side.

McKenzie Brown, 21, filled one spot for the women’s team. The hopefuls will have another chance to make the team when they compete again at the Archery World Cup in Antalya, Turkey.

“We should know by June 19 whether we’ll be sending one or three women [to the Olympics],” Bernstein said.

To get to this advanced stage in competition is a journey and adventure in itself.

Lorig, 42, was born in Tbilisi, Georgia.

She said she remembers becoming introduced to archery when she was in sixth grade.

When she was pregnant with her son, Lorig competed in the 1992 Barcelona Olympics representing Georgia and won the gold, Bernstein said.

Lorig is also known for being the coach who trained actress Jennifer Lawrence in archery for her role in the “Hunger Games” movies, according to the Rio 2016 website.

She said she considers her mindset while she is competing to be crucial in a sport that is mostly about concentration and focus.

“[It’s] unacceptable to think negative,” she said. “And your mind keeps going that way. Trying to block it, concentrate on your shot. Archery is very difficult, so it’s all how you process the shot.”

Being older than many of her competitors, she said she’s learned how to train smart by preventing injury and being mindful of what she can and can’t do.

“I can’t do certain things the young kids can,” she said. “I have to be careful because I can get injured very easily, and I take care of my body really well to not get injured.”

Kaminski, 27, said he became interested in archery when his dad won a hunting bow at a raffle when he was five. Then, he got one of his own from K-Mart for his birthday.

He said he got better at the sport growing up with help from his dad to cultivate an athletic, competitive mindset, as well as from good coaches. Then, in 2006, he moved to the training center in Chula Vista, California.

It was there he said his more traditional, old-school USA style was torn down and replaced by a new technique, pioneered by one of the team coaches, Kisik Lee.

“Now, it’s a lot more biochemically engineered so you’re using bigger, stronger muscle that are less affected by the tournament,” he said.

“We use what you call angular motion, so it’s a more efficient technique…as opposed to making the linear motion of just pulling the bow straight back, which is– you’re using smaller muscles,” he said.

He feels the key to his success has been practice – one arrow isn’t going to make a big difference after shooting a thousand at the end of trials, he said.

Kaminski, who lives in Bronson, said he individually coaches a few people right from his backyard.

He’s also helped develop an iPhone and Android app called APPtitune, which is similar to an ebook that helps users set up and tune a bow from top to bottom, he said.

“The only other resource of it is an old tuning manual from Easton that’s from the 70s,” he said. “So, we revamped it and basically put our own spin on it – critical fine touches that really help separate a good setup from a better setup.”