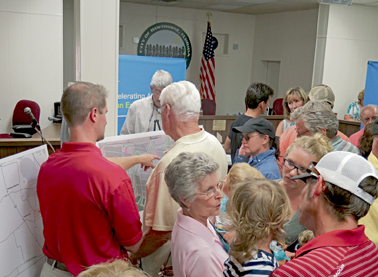 Local residents and other interested individuals turned out to hear about Florida Power & Light's proposed solar farm that would be built on 1,300 acres just outside Hawthorne. The meeting was held in Hawthorne City Hall.

HAWTHORNE – Clean energy may soon be coming to the City of Hawthorne.

Florida Power and Light (FPL) has plans to build a 1,300 acre solar farm just outside of town.

On the evening of July 6, city commissioners, FPL associates and several Hawthorne residents gathered in City Hall to discuss the pros and cons of solar panels.

The solar panels would be placed near NE CR 219A, approximately 2.5 miles north of Hawthorne.

Hawthorne City Manager Ellen Vause said, “It would have no immediate impact on the city of Hawthorne, but over time, could run both Waldo and Hawthorne with 0 emissions.”

FPL currently operates two more solar farms, one in Martin County and one on the Space Coast with cooperation from NASA.

This year, FPL will build three more solar farms: one in Manatee County, one in DeSoto County and one in Fort Myers. Each will produce 74-megawatts, the same output expected for the proposed Alachua County site.

FPL spokesperson Stephen Heiman said, “Currently we are building three other universal scale plants down in south Florida. They’re clean and plants like these benefit our customers in the long run, help keeping their bills low.”

FPL will go before the Alachua County Commission in September before official construction will begin.

“It would be clean,” Vause said. “We all need to be cognizant of cleaner energy sources.”