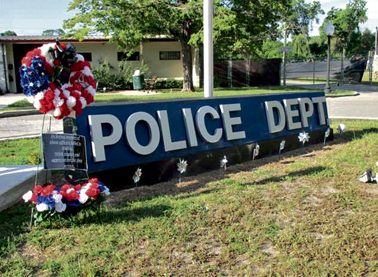 The red, white and blue wreath, which included a tribute to law enforcement, was place anonymously on the front lawn of the High Springs Police Department.

HIGH SPRINGS – A beautiful red, white and blue American flag wreath and sign dedicated to the five police officers slain in Dallas appeared Friday afternoon in front of the High Springs Police Department. There was no fanfare, no acknowledgment of who donated the wreath or who placed it.

It became clear that the patriotic wreath and sign had been quietly placed in that location by High Springs resident Leda Carrero. The wreath itself was created and donated by David and Mary Moyer, owners of Thompson Florist Shop in High Springs.

“I wanted to honor those officers out of my own sense of respect, honor and duty,” said Carrero. “There was no need for fanfare. It was just something I thought our community should do to honor the five police officers and our own police officers who keep us safe here in High Springs.”

The sign reads, “In loving memory of those officers killed in Dallas. With respect and appreciation for their service.”

In the past, Carrero has spearheaded several other honorary actions and events in the area. She sought donations and raised money for a 9-11 memorial (which has been placed on U.S. Highway 27) honoring the people who died that day and continues to remember them each year with a memorial ceremony on Sept. 11.

She raised money again for a memorial honoring service dogs, which support the nation's military and first responders. Again she created a dedication ceremony when the memorial was placed in front of the High Springs Fire Department.

Carrero, who is now retired, served two communities for a total of 33 years through the U.S. Post Office. “I never served as a first responder or in the military,” she said, “but I thank those people who have served in those roles on my behalf.”

Memorial Gathering for Peace and Healing

Following the events of the past few weeks in Dallas, Baton Rouge and Minneapolis, area pastors have asked the High Springs Police Department (HSPD) to join them in a Memorial Gathering for Peace and Healing.

Anderson Memorial Church of God in Christ Associate Elder Adam Joy, who is also a HSPD sergeant, is coordinating the gathering, which will begin at 9 a.m., Saturday, July 23. All will assemble in front of the High Springs Police Department, located behind City Hall.

“All law enforcement officers, first responders and members of the public are invited to attend,” said Joy. HSPD Chaplains Pastor Derek Lambert, First Baptist Church of High Springs, and Evangelist Jessica Hall, as well as other area pastors will be offering prayers for the officers and people slain in officer-involved shootings.

“Even though the recent incidences happened in cities far from Alachua County, we want to pray for all lives lost and mourn for their families and friends. We also want to wash peace and healing over them and over our local communities as well,” said Joy.

“We hope to inspire unity and peace to all area communities and foster a healthy relationship between the police and the citizens we have sworn to protect and serve,” said Joy.

Anyone wishing to donate coffee, juice or pastries is encouraged to do so.