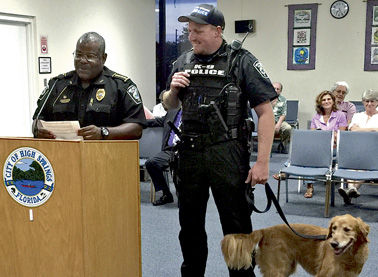 HIGH SPRINGS – After several years of faithful and dedicated service to the citizens of High Springs and to the High Springs Police Department (HSPD), K-9 Officer Aggie officially retired Monday evening. During the High Springs Commission Meeting, she and her handler, HSPD Officer Ethan Presnell were awarded a plaque honoring her service by HSPD Chief Joel DeCoursey, Jr. Aggie will live out her retirement with Presnell and his family.

The plaque included a photo of Aggie and Presnell in front of their police vehicle, along with a shiny, new HSPD badge. “The one she wears while working is pretty beat up after all these years,” said Presnell.

Aggie is a nine-year-old Golden Retriever who originally was handled by Sgt. Harper for the first four years of work with the department. He literally asked Presnell to take her on a few days before he died. Presnell has worked with her for another three and a half years.

Aggie was trained as a narcotics dog, but is also used in public relations situations...especially around school children. “She is a very calm sociable animal with a great temperament around people and children,” said Presnell. “She is methodical at sniffing and this breed is excellent at duck or quail hunting.”

A new full-blooded male German Shepherd named Caesar will begin formal training with Presnell soon. He currently lives with Aggie, Presnell and his family and is undergoing basic obedience training. “The dog was bred in Czechoslovakia and imported into the U.S. in January of this year,” said Presnell. “He was purchased initially by a kennel in Palm Beach Gardens and will be two years old in December.”

Caesar will be trained to apprehend as well as to be a narcotics dog. Training starts Oct. 3 and will proceed for about six months. When his training in that area is complete, he will be able to track suspects and apprehend them, if needed. After 570 hours of training, he will be tested and must be found to be 100 percent under control when he's working.

Presnell, who has had a history of working with dogs from his youth, will undergo training along with Caesar. “There are new case laws and best practices to learn about, as well as commands to learn,” he said.

Ceasar will then undergo two to three more months of training to be a narcotics sniffing dog. He will be adept at doing both things by the end of his training.

Presnell, who has had a history of working with dogs from his youth, will undergo training along with Caesar. “There are new case laws and best practices to learn about,” he said.