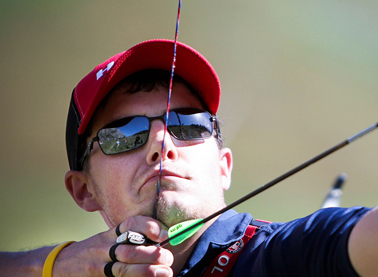 Area resident Jake Kaminski won silver medals in London in 2012 and most recently in Rio in 2016. He is also a three-time World Cup Team gold medalist. (Photo special to Alachua County Today)

NEWBERRY – One area resident, who previously trained at the Easton Newberry Sports Complex Archery Range, won silver medals at the London 2012 Summer Olympics and, more recently, at the Rio 2016 Olympics.

In addition to his most recent wins, the 28-year-old won a gold medal at the 2014 Pan American Championships (individual), and the same year won a bronze medal at the Archery World Cup Stage 2 (team) and gold again in the Arizona Archery Enterprises (AAE) Arizona Cup (team). He has won too many other archery medals to list. He also coaches up and coming archers in his own backyard.

This year's Rio Silver Medal was in the category called Team Round Three-person. He was one of three people on the United States team to compete against three people from teams from several other countries.

Said Kaminski about his participation in the Olympics, “It's a once in a lifetime experience and I've been able to compete for the U.S. twice and received medals each time, which very few people do. So it’s a dream come true, for sure.”

“It was quite a spectacle,” he said. “They made do with what they had. It was quite picturesque. We were able to shoot the final stretch [of the competition] at the same venue in which they hold Carnivale each year.

Kaminski has been training full time since 2006 and lived at the Olympic Training Center in Chula Vista, California from 2006 to 2012. He moved to the Daytona Beach area, where his parents live, for another three months and moved to this area for a possible job opportunity at Easton in Newberry. He now shoots full-time in his backyard.

He got started in archery after his dad won a bow in a gun raffle when he was six years old. “I found a bow in department store. I started shooting in my backyard and never stopped,” he said.

“Easton is a great facility,” he said, “but I get more out of shooting in my own backyard right now.”