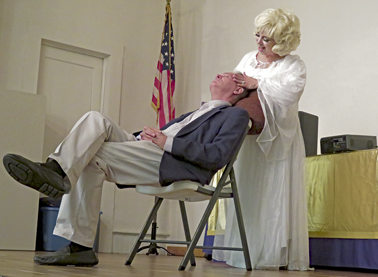 A preview of "Blithe Spirit" was on tap Saturday as the High Springs Women's Club hosted the season opening "Party with the Stars." Today photo/RAINA BARNETT

HIGH SPRINGS – A “Party with the Stars” was held in the High Springs Women’s Club the evening of Saturday, Sept. 7. The cast from the season’s first show, “Blithe Spirit,” performed a sneak peek from a scene in the play. Small segments from the other shows, which include “Jacob Marley’s Christmas Carol,” “Six Women with Brain Death or Expiring Minds Want to Know,” “Lend Me a Tenor,” “A Rehearsal for Murder,” and “Annie, Jr.,” were also performed to entice the audience to buy tickets and attend the plays.

Julia Anderson, 30, an Alachua County Resident, was pulled in and performed on the stage for her first time just for the preview.

“Now I have plans to audition for ‘Six Women with Brain Death or Expiring Minds Want to Know,’” she said. “I love how excited the audience gets.”

“I’m from New York, and used to do television work,” she said. “I like the off-camera aspect of a play.”

The gala offered fresh hors d'oeuvres, sweets and veggies. Brochures were passed out with information about the plays and how to donate to the playhouse.

Board member of the High Springs Playhouse, Alison Horvath, said she has been involved with the playhouse for seven to eight years.

“I was also treasurer for five years, and I’ve been on stage a few times,” she said. “I really want to see ‘Blithe Spirit.’”

‘Blithe Spirit’ comes just in time for Halloween, with running dates from Sept. 30 to Oct. 23.

“This theatre is one of the most exciting and rewarding adventures,” Simone said.

Tickets and more information on how to get involved can be found at highspringsplayhouse.com.