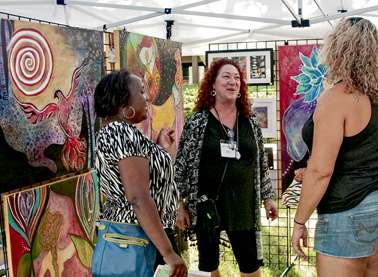 GAINESVILLE – After a long hot summer, area temperatures began to cool down this past weekend, just in time for the 32nd Annual Arts festival at Thornebrook.

Featuring 123 artists and 13 musical acts, the event is considered one of the top area art festivals. The Thornebrook festival was originally established as a showcase of local artist who were members of the Gainesville Fine Arts Association, working in cooperation with the merchants in the Thornebrooke Village shopping center in northwest Gainesville. It provides the public with an art festival combined with various merchants and restaurants to provide all the amenities for a day out viewing art.

Unlike many festivals, which are laid out in straight lines along the street, Thornebrook offers a meandering set up through the shopping village for a more relaxed experience. As the festival grew in attendance and reputation, the organizers decided to take it to the next level and open it up to other artists from around the state that were not GFAA members. In 2003, the festival committee hired Lyn White to be the festival director. White had plenty of experience at organizing festivals. In 1982 she began directing the Gainesville Downtown Fall Arts Festival and ran in for seven years. But working full time and running the festival became too much to try to do both, and White retired as director in 1989. However, she continued to be involved in the Gainesville arts community.

White worked with the GFAA and the merchants to expand the show and provide more amenities for both the artist and the attendees.

All artist applicants are reviewed and judged to gather a wide variety of styles from talented artists. The judging process attempts to limit the amount of any art form and chose different individual styles in each medium. Artist are picked from a wide variety of mediums including painting, ceramics, glass, fiber and textiles, photography, jewelry, drawing, mixed media and wood.

As an incentive to the artist, they also established cash prizes from ratings by judges. There are nine awards, ranging from a best of show prize of $500 and $150 awards of merit.

The winner of this year’s best of show prize went to Candace McCaffery for her quilt work. “With the rising cost of entrance fees, it can be hard for artists to make a profit at shows, so the cash prizes help encourage them to want to return”. White said.

The musical acts help round out the experience for the general public and encourage them to spend more time at the event and visit the merchants in the Thornebrook village.

“Each year gets a little better” White said. “You take what you learn and try to improve it every year to make it a better experience for everyone”.