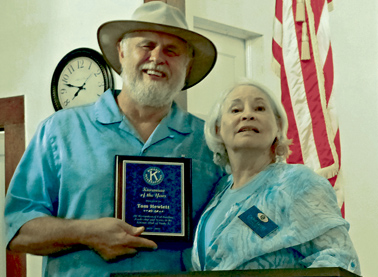 HIGH SPRINGS – Kiwanis Club of Santa Fe, with members in Alachua and High Springs, held an installation banquet recently to thank their existing officers and board members for their service, welcome new officers and board members and to honor three citizens for their work in this region. The banquet took place at the High Springs New Century Woman's Club on Thursday, Sept. 29.

At this year's Kiwanis Installation Dinner three people were recognized for their outstanding volunteerism in the High Springs/Alachua area. Alice Green presented the award to Lucille Gabriel saying, “She is a mainstay volunteer at the Community Outreach in High Springs. There are 1,300 families registered at this site and they serve 300 families per month. The month of September saw an increase as 48 new families registered. Ms. Gabriel along with Outreach director, Bella Diefenderfer, assist these families with food and clothing needs.”

Linda Hewlett commended Damon Messina, the Alachua Parks and Recreation Director, for his volunteerism saying, “Last year he directed both the baseball and softball World Series for kids. He also started a regional basketball league of over 50 teams that serves many children in the area. He also is in charge of special events for Alachua including Halloween and Fourth of July. He strives to make the sports facility accessible to all regardless of skills or finances. He also mentors several teens from Santa Fe High School.”

Ed Booth lauded the work of Pastor Sammy Nelson, Jr. who was unavailable at the time of the awards. “Sammy created a program for latch key kids, making sure they have food and get homework done, then focusing on other activities to develop proper interaction skills. He mentors many youth at his facility in downtown High Springs. He encourages children academically and spiritually to reach their potential.”

“We believe there are a lot of people in our area doing a lot of good for our citizens,” said Tom Weller, Incoming Vice President. “They don't always get the recognition they deserve so we thought this banquet might be a good time to honor their efforts,” he said.

“We had a slate of nine or 10 nominees to choose from for this year's presentations,” said Linda Hewlett, club secretary. “It was really interesting delving into what each person really does that people may not know about,” she said.

Outgoing president Cathy Sayers recapped the year, talking about the various activities and fundraisers the club had been involved in. “Murder in Margarita Land,” a murder mystery dinner theater event, was a huge success. The club also renovated the gazebo at James Paul Park, behind High Springs City Hall and tutored third graders in reading and math at Alachua Elementary School.

“During the year, Sayers talked about raising sheep, which she loved to do,” said Linda Hewlett. “She also came in with a new hat and a story as to where it came from, or something interesting about the hat itself at each meeting. She told us she didn't want a plaque for her wall when she stepped down, so instead we gave her a new hat, made out of wool and had it embroidered locally. We included a sheep mug as well. It was all great fun,” Hewlett said.

“In honor of Sayers service to our club, everyone showed up wearing a hat to wish her well,” said Weller.