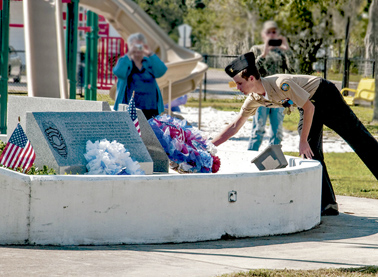 WALDO – Each Nov. 11, America honors its veterans who have served, and in some cases died, to preserve the freedoms and values of democracy. It is a day to reflect on the courage and sacrifice of the men and women who were willing to leave their homes, family and jobs to serve their country and put themselves in harm’s way.

Communities, large, small and those in between, hold ceremonies as a way to remember and to thank those who served and continue to serve. This past Friday, Waldo was one of those communities that reflected on the history and meaning of today’s Veterans Day.

The date was originally chosen to celebrate the end of World War I. It was 1918 and the world had spent four years in a conflict that cost over 15 million lives. It was a brutal war like none before, where new killing technology created massive battle losses while the military leaders still used outdated tactics. In many cases, there was little movement in the battle lines over the course of the war. Germany, England and France had exhausted their armies in a war of attrition with the soldiers stalemated in trench warfare.

For a war weary world, Nov. 11 celebrated the end of hostilities in what would be called “the war to end all wars.” Many countries created holidays to remember the soldiers' sacrifices. In America, President Woodrow Wilson dedicated Nov. 11 as Armistice Day to commemorate “the heroism of those who died in their countries service and with gratitude for their victory.” Congress passed a bill to recognize the official date in 1926 and Armistice Day was made an official national holiday in 1938.

Tragically, World War I was not the “war to end all wars.” Between 1938 and 1941 the world again would sink into an all-out war that would cost over 48 million lives including 400,000 American soldiers. World War II would be the greatest mobilization of armed forces, which created a large force of returning veterans. The government's Veterans Affairs Bureau was created to help deal with those returning veterans. After the end of the Korean War, it was decided to change the name from Armistice Day to Veterans Day to honor all veterans who had served in our armed forces in all capacities, not just soldiers who fought in the two World Wars. Today, the holiday honors all veterans who have served in war or peacetime.

For the past four years, the small town of Waldo has held a ceremony on Nov. 11 to honor its veterans. This year marked the first time it was held in the city park, where a wreath was laid at a monument to its veterans.

About 30 people attended the ceremony including 12 veterans. The ceremony began with the crowd reciting the Pledge of Allegiance, the playing of the National Anthem and a prayer for all veterans who made the final sacrifice. Eastside High School NJROTC Navy Cadet James Whitney then laid the wreath at the monument garden, which contains three markers honoring veterans, police officers and firefighters.

Joe Lipsey was the emcee for the event and introduced Waldo Mayor Louie Davis, who served in the Army from 1965 to 1968. Davis spoke about the sense of duty and sacrifices that veterans make for their country and introduced the keynote speaker, former Marine Sergeant Major Pat McCullough.

McCollough was the first female to serve as a Sergeant Major on board a ship and the first women assigned to Air Defense. While in the Marines she met her husband, L.D. McCollough, who served 21 years in the Marines. McCollough spoke about her experiences as a Marine and the progress that women have made in the service and the special challenges they face in a male dominated career. She also talked about the sense of duty all service personnel feel. She spoke of the willingness to do whatever it takes to defend the country, even if it means sacrificing your life.

“When an enemy raises their hand against our nation, our military is there to protect and defend. It doesn't matter where you are, we will do our job and come and get you” she said.

The oldest veteran at the event was Emery Raymond Estes. A lifelong resident of Waldo, Estes is now 92 years old. After the Japanese attack on Pearl Harbor, he joined the Marines at the age of 17 and saw combat at Bougainville and Saipan.

After the ceremony, there was a tour of the train museum and lunch supplied by the City of Waldo. The Waldo Historical Society and the Community Center Seniors Group also helped organize the event to honor their fellow citizens who took the time from their lives to serve the country.