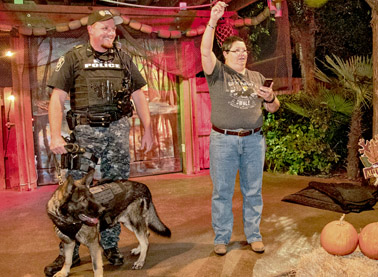 HIGH SPRINGS – The Great Outdoors Restaurant was packed on Tuesday Nov. 15 as residents turned out to greet their new High Springs police officer. His name is Cesar and he is a bit unusual. He is only two years old, is from Czechoslovakia and has four legs. But then again, some of the residents who came to greet him had four legs as well. Cesar is the new police dog for the city of High Springs and the citizens came out to meet him and show support, and a number of them brought their own dogs as a sign of unity. The police department previously had Aggie, a golden retriever who was a drug sniffing dog. When Aggie passed away at the age of nine, the department decided they wanted a K-9 dog that was more versatile and could be trained for other duties such as tracking and subduing a suspect. They needed a larger more powerful dog that was bred for police work – but those dogs are expensive.

An anonymous donor came forward with a $10,000 donation to cover all costs of purchasing, initial care and shipping for the dog. Cesar is a pure breed German Shepard, and was brought from Czechoslovakia. The breed originated in Europe and dogs from the region are recognized as possessing superior genetics and health. Officer Ethan Presenell had worked with Aggie for her last few years and became Cesar's new owner and partner. Together they will undergo 570 hours of general training for K-9 units as well as an additional 100 hours in narcotics training. The department received Cesar in the spring of 2016 and the training will last until early February 2017.

High Springs resident Leda Carrero knew that the police dog for the City of Alachua had a bulletproof vest and wanted to help Cesar get the same protection, but the vests are also expensive. Carrero started a fund raising campaign to get the $700 needed for a vest.

One day she was having lunch with retired Alachua County deputy Clare Noble, who wanted to help with a donation. When Carrero told her the cost, Noble went out to her car and returned with a check. “When I first looked at it I thought it said $70 and I thanked her for her donation, but on second glance I was surprised to see it was for the full $700,” Carrera said.

For Noble, it was just a way to help a fellow officer. “Some people feel you have to save your money when you retire. I am the opposite. You can’t take it with you so I believe in spending it on good causes where it will benefit others,” Noble said. “Cesar and Presnell were fellow officers and the vest could protect the dog, so I figured it was a worthy cause and could be paid in one donation” she said.

At the event at the Great Outdoors, High Springs Police Chief Joel DeCoursey, Jr., presented Clare Nobel with a certificate in gratitude for her donation. Then the main attraction came to the stage with Cesar wearing the vest that her donation bought. Officer Presnell and Cesar stood on stage as audience members took photographs. Because Cesar is young, energetic and in training, the audience was not permitted to touch him, and other dogs were kept at a distance to avoid any issues. Cesar took it all in stride and seem to enjoy the attention. High Springs now has a new lawman in town.