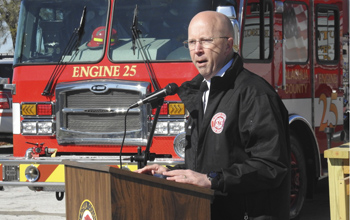 ALACHUA – The City of Alachua now has an additional fire station to provide services to residents. Up until the 1970s most of Florida's fire and rescue services were located in cities. The rural population had to wait for the fire trucks or ambulances to travel from the cities. When time is critical, this could mean the difference in saving a structure or saving a life. The state established the Municipal Service Taxing Unit at that time to raise funds for additional stations in rural areas. Even so, the stations had huge areas to cover and the state left it to the counties to determine the best use of funding to provide safety and medical help to these areas.

In Alachua County, a Master Plan was developed that anticipated growth and need for services to cover as many people as possible and where new stations would be located.

In 2004, the first mention of a station between Gainesville and Alachua was discussed, but funding was not available at that time. The Master Plan was updated in 2012 and the idea of a station in that area became part of the plan due to anticipated growth in the area. In 2015, the County and City of Alachua began planning for a station near Hague, halfway between Alachua and Gainesville. The City of Alachua's single station was covering a large area, taxing their ability to respond quickly. With multiple new communities like Turkey Creek and the expansion of businesses along the U.S. Highway 441 corridor, the site near Hague became an ideal location for a new station.

But a permanent station would take three to four years to complete so funding was put toward a temporary building that would host a small rotating crew of three and have a single fire engine for rapid response. While the station would have trained paramedics in their crew, an ambulance would be dispatched from one of the other stations if advanced medical care and transportation is needed. The County received bids for constructing a temporary building with living quarters for the crew and equipment with the low bid of $270,382. However, the County was able to drop the cost down to $135,800.

On Feb. 27, 2020 on a cold, windy morning, officials from Alachua County, City of Alachua, and the Alachua County Fire Department (ACFD) gathered at the metal building to dedicate the new station with a ribbon cutting. Despite the weather, about 50 people attended the ceremony.

AFCFD Fire Chief Harold Theus offered a welcome to all and gave a brief history of the 14-year struggle to make the station a reality. He was followed by County Manager Michele Lieberman and former firefighter and Alachua County Chair Chair Robert Hutchison. Alachua City Manager Adam Boukari and Mayor Gib Coerper thanked the County for their perseverance in making the station a reality.

The station’s location means that residents and business in the area will get quicker service for emergencies. An added bonus for residents may also mean lower insurance costs in the surrounding communities due to having a closer fire station.