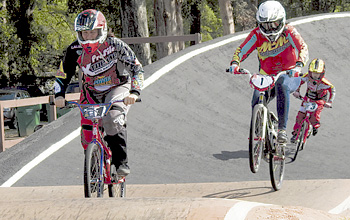 HIGH SPRINGS – High Springs is often associated with nature and the rivers that provide recreation for boating, swimming and cave diving, but the rivers are not the only sporting attraction that brings people from all over the world to the town. It is also home to a quarter-mile Bicycle Motocross Racing track (BMX) that is considered one of the smoothest and most challenging tracks in Florida that has even attracted Olympic hopefuls to train there.

BMX racing is a popular extreme style sport that often involves whole families racing and competing for points to be used in state, regional, national and even worldwide competitions. There are 22 sanctioned tracks in Florida and from October to April each year there are 12 competitions held to qualify for the State Championship competition, which is held in Orlando in May. The High Springs track always hosts at least one of the qualifying events.

Bicycle Motocross racing (BMX) was invented in California in the late 1960s and has gained popularity around the world. In the 1970s, the USA BMX Foundation was established, and by 1981 the International Cycling Union officially recognized it as a sport. In 2008, it was officially sanctioned as an Olympic sport. Today there are over 370 BMX tracks in the United States.

BMX is an off-road bicycle competition between up to eight riders on a serpentine single lap clay track that includes jumps and large banked turns. The bikes are single gear, with two classifications based on either a 20- or 24-inch wheel size. There is a non-pedal bike for young children called Striders, which are moved by the rider’s feet. BMX racing attracts a wide variety of ages, some as young as two and one who is 71 years old, often including multiple generations in a family.

The High Springs track was built in 2002 by the City of High Springs and a partnership with local volunteers to provide youth and family-friendly sporting in the area. The track is a nonprofit organization under a board of directors involved in the sport. The track is managed by John and Laura Pringle, who are both BMX racers, along with their two daughters.

Over the weekend of Feb. 28 to March 1, over 700 racers participated in the state qualifying at the track. Most of the riders were from Florida, but 16 other came from other states and one even came from Japan. There were 90 different classes/groups spanning balance bikes, novices, intermediate and experts between the age of five and under to 51 and over. The classes are based on age groups, type of bike and experience so that all riders are only competing against other riders with the same ability and equipment. In the BMX sport, everyone starts as a novice. Both boys and girls move up after winning 10 races and boys move up again after 20 wins. More wins allow riders to compete in district, state and regional contests. If they win these, they can compete at the Grand Nationals held in Tulsa, Oklahoma.

To Laura Pringle, it's not the competition that's important—it's the family orientated spirit among the BMX community. “Many times the parents will come to watch their kids race and wind up doing it themselves. You don't see too many sports where parents participate with their kids.”

Pringle also pointed out that the event is a positive contribution to the local economy. “Based on 3.2 spectators per participant, which is a number studied by the BMX industry, we estimate that there 2,377 per day on Saturday and Sunday for a total attendance of 7,132.

We offer RV camping, but many also stay at local hotels and use local shops and restaurants. There were 1,585 making the initial economic impact for just the hotels for $190,000. Including the other services used in the community, the total estimated economic impact using a conservative $50 per person/per day was about $546,000 for the weekend event.” Pringle said, “But the event is not just about economic impact or the competition, it's about an opportunity for the BMX community to get together and have fun”.