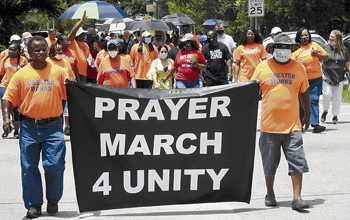 ALACHUA – Local pastors in Alachua are leading by example. With the country facing the COVID-19 pandemic, strained race relations, protests, unemployment, police practices and political division, the resulting stress and division has hit communities across the nation.

Pastor Adrian Weeks of Alachua’s Saint Matthew Baptist Church was concerned about the effect this was having on his fellow citizens and the community.

In talks with several other area pastors, the idea of leading by example through a show unity was born. Out of their discussions, it was clear that the churches, regardless of the religion or sect of Christianity or ethnic makeup, they all stood together for the same ideals.

Weeks’ inspiration was a March for Unity, that instead of protesting, was promoting unity in the community and using prayer as a symbol for the positive.

“In the church, the way we handle crisis is to come together and listen to others’ views and concerns with an open heart and mind,” Weeks said. “We decided to hold a prayer march that would bring people, not only from the various churches, but all people that want to see our country change for the better.”

With the help of several other pastors, including Doug Fenton from First Baptist Alachua, they gathered support from the community and city government.

“The emphasis is that we may all come from different backgrounds and belief systems, but we can all march together for unity and peace,” Weeks said. In the span of two weeks he had gathered enough support and cooperation from the city and had reached out to numerous groups in the community.

On Sunday, June 28, people gathered at Maude Lewis Park in Alachua. Diversity was the key element, not only by the participation of various churches but also by citizens as well. All were there to promote positive ideas.

At 2 p.m. they marched down Northwest 141st Street to Main Street as Alachua Police Department officers stopped traffic at the U.S. Highway 441 intersection to allow them to pass. The group gathered at the Skinner Field baseball field that had been set up with properly distanced chairs and room for people standing to spread out to hear speakers.

Describing the purpose of the event, Weeks said, “We wanted a variety of speakers from different backgrounds to show the unity of the community and that we can all work together for the good of our nation.”