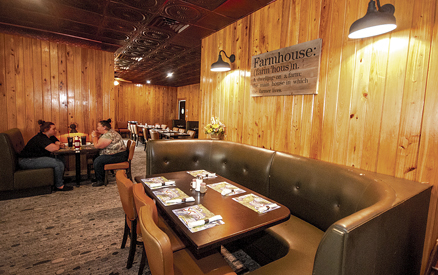 NEWBERRY ‒ There is a new restaurant in an old location in Newberry. In the historic downtown area, at 25405 W. Newberry Road, there stands a two-story brick building built in 1906. Originally the downstairs portion was a general store and upstairs was The Commercial Hotel.

At the time Newberry was a phosphate mining town and railroad junction that was established in the 1880s. As the town grew with over 16 mining operations in the area, more commercial brick buildings were built, including the hotel. Over the years it has had many incarnations and was home of the well-known Backyard BBQ restaurant for a number of years. Two years ago, the restaurant closed and the building sat vacant.

New owner Jamie Griffin has been in the restaurant business for 35 years, and he currently owns the Lighthouse in Fanning Springs and Bett's Big T in Chiefland.

Griffin spent two years renovating the building back to its original appearance. Now, from the brickwork to flooring, the restaurant reflects the way the building looked more than a century ago. Griffin is honoring the building’s rich history by naming the new eatery The 1906 Farmhouse Restaurant.

After the restoration, the restaurant opened its doors to the public on Sept. 17, 2020. The 1906 Farmhouse Restaurant will be open from 6 a.m. to 10 p.m. every day of the week for breakfast, lunch and dinner. The breakfast menu offers traditional breakfast platters, pancakes and waffles and omelets. The lunch menu features sandwiches, salads and burgers while the dinner menu offers chicken, steak and fried seafood platters along with sandwiches, salads and burgers.

Griffin says they will have blue plate specials that will rotate daily. On Fridays and Saturdays from 5 to 10 p.m., they will feature an all-you-can-eat seafood buffet that features crab legs for $26 per person. The restaurant also has a smaller kids menu as well as beer and wine for the adults.

Griffin lives in Fanning Springs where he has The Lighthouse restaurant, but now spends most of his time with the new restaurant.

“I am lucky with good managers at my other locations, which allows me to get this new restaurant off the ground. I felt that it would fit Newberry's character with its traditional country style fare. It’s a little country, a little steak, a little seafood,” said Griffin. “People in Newberry don’t have to go all the way out to Gainesville for food, but at the same time, people in Gainesville can take a trip out if they want to get away to the country.”