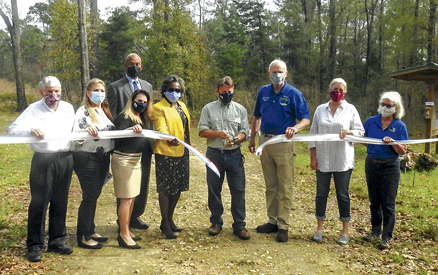 ALACHUA ‒ A new nature preserve in Alachua County has opened to the public. Turkey Creek Preserve, located behind the Turkey Creek subdivision in the city of Alachua, features 375 acres of protected woodland including several habitats, such as a basin swamp, depression marsh, dome swamp, upland hardwood forest, blackwater streams and sinkholes.

Four miles of Turkey Creek winds its way through the preserve that features almost five miles of hiking trails. It’s also home to a variety of wildlife, including several endangered species such as the woodland poppy mallow and gopher tortoises.

The opening of the park has been a long time coming. The area was historically used as cattle pasture land through much of the 1900s under the ownership of the Cellon family. Old cattle infrastructure is still present in the northeast corner of the preserve, including old sorting pens, the foundation of a cattle scale and a concrete ramp used to load cattle into trucks.

The property was purchased by investors as part of the Turkey Creek subdivision with plans to build Phase 2 consisting of 1,000 houses in addition to the 900 houses already built during Phase 1.

Alachua County bought the property in 2009 from the Gainesville Investment Group for $4 million using a combination of Wild Spaces Public Places funds and a $1.5 million grant from the Florida Communities Trust.

According to Charlie Houder, the county’s land conservation and management director, the Turkey Creek Preserve it took more than a decade to restore to its former glory because the area was in disrepair for years. The cattle fences had fallen down as well as trees and overgrown vegetation covered the area.

“The area had also become a dumping ground and we hauled tons of trash and metal surplus out of here, exotic plants that had to be removed and replaced with native species, we made the trails, built a bridge and a parking lot to make it accessible,” Houder said.

While the park is open to the public, another entrance is accessible within the Turkey Creek neighborhood providing a large nature area to explore for the residents. “The Turkey Creek Preserve is a place for residents to come exercise, explore exotic plants and wildlife. There will be no excuse for not getting out of your house and going for a really long walk,” said City of Alachua Mayor Gib Coerper.

Visitors can check out five miles of marked trails, all of which are open to hikers. Select trails are open for off-road bicycling and equestrian use. There’s also a half-mile fitness trail with seven exercise stations. The Turkey Creek Preserve is open from 7 a.m. to 6 p.m., October through March and 7 a.m.-8 p.m., April – September. The entrance is located at 6300 N.W. 93rd Avenue.